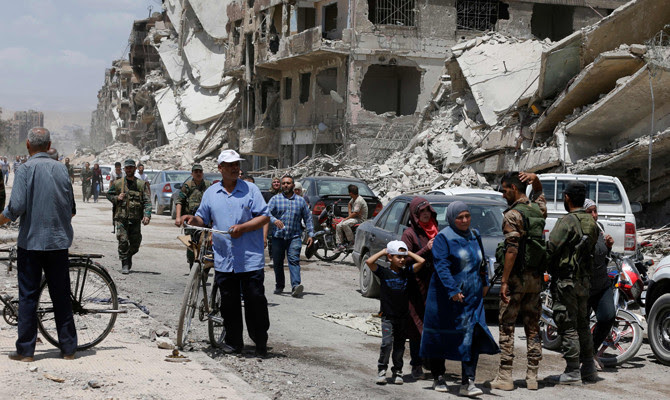 'The Assad régime in Syria was accused on Saturday of using a new law on urban development to rid the country of all political opposition.

The so-called “Law 10” allows the regime to acquire previously private property to create zoned developments, and to compensate the owners with shares in the new projects.

However property rights are in a state of confusion after a seven-year war that has created more than 5 million refugees and 6 million internally displaced people. Many of the displaced have lost the necessary paperwork, are struggling financially or not aware of the legal requirements in time.

“The régime has a two-fold goal,” he said. “First, terrorize the opposition and supporters of the Syrian revolution so that they lose the right to their properties.

“Second, there is talk of reconstruction in Syria now. This law sends out a message to investors that their interests lie with the regime. It is an attempt to tempt companies and business people to support the regime, because the regime is the only party that approves bids and gives grants and contracts. All this merely adds to the Syrians’ plight and misery.”

Al-Aridi said the attempted land grab was being resisted by European countries, especially France and Germany. “The Syrian Negotiating Committee is also exerting a very important effort so that such an evil act will not happen,” he said.

Also on Saturday, the US warned Damascus it would take “firm action” if the regime violates a cease-fire deal, after Syrian aircraft dropped leaflets on a southern province in advance of an expected offensive.

Al-Aridi said any such offensive would be a breach of agreements between Russia and the US on de-escalation zones, and he warned the regime and Iran against “playing games” with the US. “Such threats are part of a response to the two unanswered Israeli attacks on Iran’s military positions in Syria,” he said.

“They area also meant to divert attention from the American-Israeli intent to kick Iranian militias and forces out of Syria.”

He said the regime and Iran could do nothing without Russian support. “We don’t think the Russians are willing to provide such support, or to mess with the US or Israel. Parallel to such threats, Assad is trying to make certain reconciliation agreements with what they call ‘Syrians in liberated areas.’ We believe that they cannot do anything of the sort.” '
Posted by Dick Gregory at 08:40