The traditional English football chant, "You're going home in a fucking ambulance," now seems to be the way disputes are settled between Syrian régime commanders.

Posted by Dick Gregory at 09:06 No comments:

“Hezbollah is combating Syrian rebels. Its true a portion of them are extremists but we know the majority want a free country. Hezbollah’s media arms are trying to show the dark face of the revolution in Syria while there are many bright faces that they intend to cover,” he said. “The worst thing is that western media is becoming affected by the Hezbollah rhetoric. They want us to believe that all the Syrians are Al-Qaeda and [Islamic State].”
Posted by Dick Gregory at 06:56 No comments: 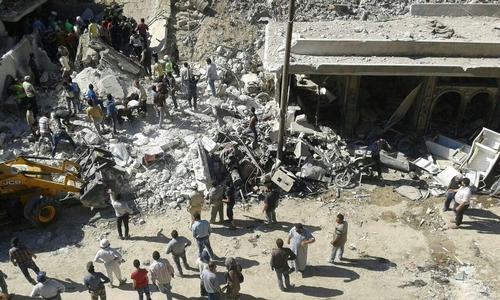 “Bodies were everywhere - on the tables,
in the hallways, on the floor.”

'In the afternoon of 04 June 2015, a horrific missile strike devastated a town centre in Idlib Governorate, Syria. The wounded arrived in wave after wave at a nearby small makeshift hospital that is supported by Médecins Sans Frontières (MSF). MSF immediately started organizing a major resupply of essentials for the hospital. The hospital director, who requested to remain anonymous for security reasons, describes the situation.
"At around 3pm we heard a deafening sound as a result of 3 rockets exploding in a town nearby. A town overwhelmed, desperate locals living alongside many displaced people from other areas in Syria.
Apartment buildings and shops, demolished in a few minutes, all turned to rubble.
Bodies ripped apart, flesh everywhere. This is a massacre. This is carnage.
Total destruction that is hard to describe; a state of hysteria took over, first among the families looking for their loved ones, neighbors searching for their neighbors, and then it spread to us medical staff." '
Posted by Dick Gregory at 06:39 No comments: 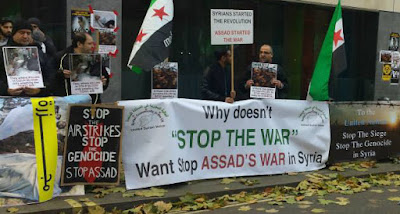 "Anti-war activists have a duty of solidarity to the Syrian people. It is not enough to oppose US/UK intervention, while remaining silent about the governments of Iran and Russia intervening on the side of Assad. Refusing to support activists on the ground who continue to organise and fight for the the original goals of the revolution is a terrible betrayal. The abandonment of Syrians is a primary reason for the growth of extremist factions like the Al-Qaeda linked Jabhat Al-Nusra. Syria is complex, but complexity is not a worthy excuse for inaction or silence. Understanding Syria starts with talking to Syrians and Syrian civil society.Saturday’s Stop the War event is yet another anti-war conference without a Syrian activist or speaker talking about the situation in Syria. This shameful stance must be corrected, or Stop The War will be forever known as the organisation which turned its back on Syria."
Posted by Dick Gregory at 18:49 No comments: 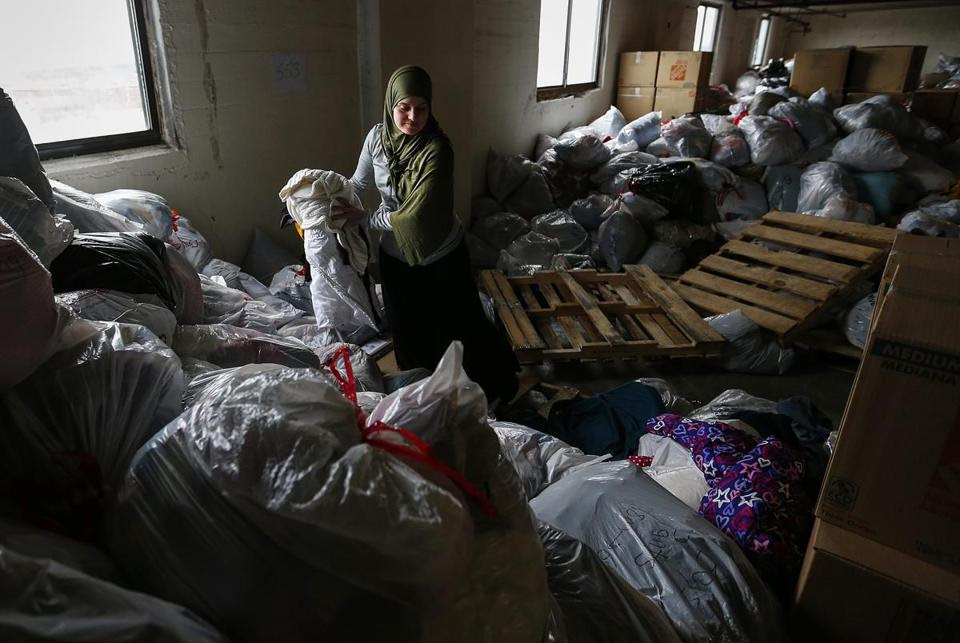 From small-town N.H., a stream of relief to Syria

"When Assad’s forces brutally attacked antigovernment demonstrators in 2011, Nadia Alawa was outraged — and sickened by their torture and murder of a 13-year-old boy. She forced herself to study the macabre photos on Facebook documenting the ensuing violence.
NuDay volunteers collect donations in mosques, churches, and clinics across New England. They sort and pack the items into shipping containers and send them to Turkey, where a NuDay employee drives them to the Syrian border. Syrian partners pick up the goods and distribute them in areas of northern Syria controlled by rebel groups — and never in regions under the sway of the Islamic State or the Assad regime, Alawa said."
Posted by Dick Gregory at 16:35 No comments: 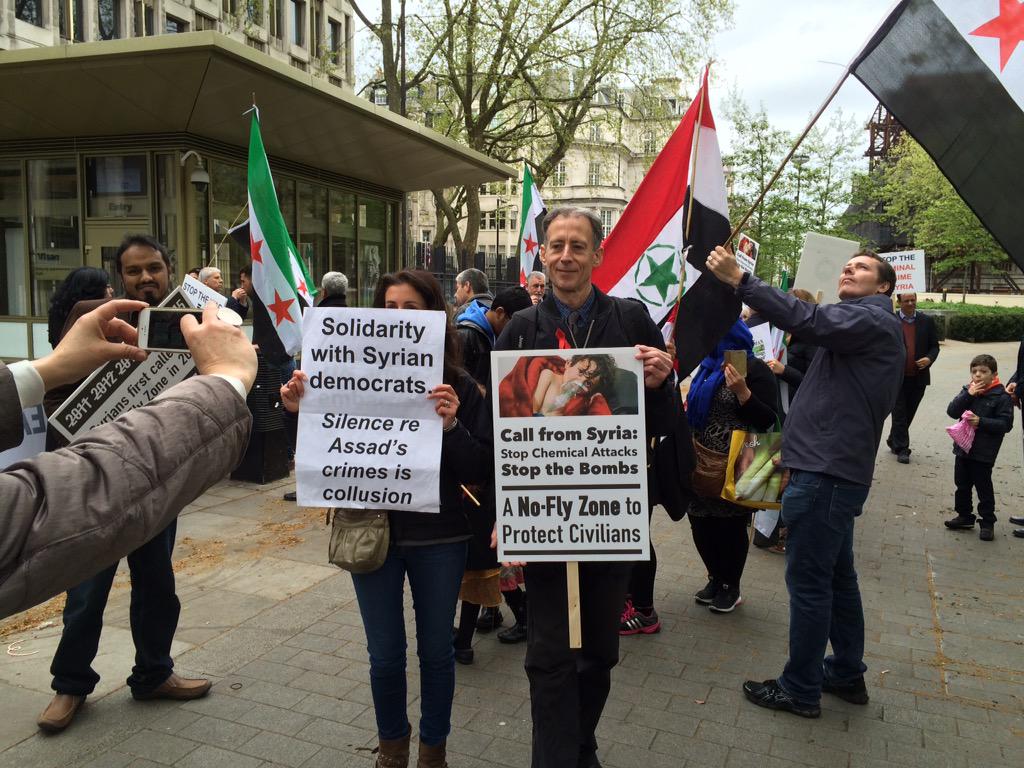 The Syria Solidarity Movement UK is hosting a debate on the merits of a No Fly Zone for Syria*. Most are in favour, I tend to sympathise with the argument against by Mark Boothroyd, one of the most active of the few Syrian solidarity activists in the UK, so not one of the numpties claiming the West is the main enemy in Syria, but just that they are not coming to help protect Syrians from Assad. The picture is one Mark tweeted, showing Peter Tatchell holding a placard calling for a NFZ.

"While this demand would be supportable if those countries [Britain, France and the US] were honest and pure in their intentions towards Syria, they are not. They are imperialist powers whose history of interference and reactionary policy in the region goes back to the Sykes-Picot agreement and before.

Their actual intentions can be gauged by their actions towards the Syrian revolution so far, and particularly their actions in the last few months as the demand for a NFZ has been raised in earnest by the White Helmets and other campaign groups.

Throughout the entire course of the Syrian revolution these countries have refused to give the armed opposition anti-aircraft weapons to protect themselves and civilian areas against air attack. A number of spurious reasons have been given for this, none of which stand up to much scrutiny. The argument was raised that the weapons might fall into the wrong hands (meaning Da’esh or Al-Nusra), yet far more weapons have been taken by Da’esh from the Iraqi army—armed and funded by the US—than have ever been taken from Syrian armed opposition groups. And it was the refusal by the US, Britain and France to arm the nationalist and secular opposition forces loosely organised in the Free Syrian Army, which lead to these groups becoming marginalised due to lack of weapons and resources, leading eventually to what little arms and fighters they had being taken or absorbed by better funded and armed Islamic rebel groups."

Posted by Dick Gregory at 16:24 No comments:

Dani al-Qappani
'A senior UN representative visiting Moadamiyeh today as part of a delegation in the company of regime officials, told residents of the town that the UN “can’t in any way bring any food or medicine” to the besieged civilians, despite rising illness, endemic malnutrition and increasing numbers of deaths from starvation due to the continuing regime siege.
The UN’s latest visit to the town is widely viewed by residents as yet another piece of political theatre by the regime and the UN, with one resident saying, “The visit’s only meant to save Assad by misrepresenting the so-called truce in Moadamiyeh as perfect in order to sell de Mistura’s ‘political solution.’”
The UN’s and Assad regime’s continuous attempts to force the Syrian people into accepting a ‘political solution’ allowing Assad to stay is flatly rejected by the people of Moadamiyeh as by most of Syria. In the words of another resident of the town speaking after the latest UN visit, “We refuse any political solution that doesn’t force Assad to leave and doesn’t break the siege of Moadamiyeh. We’ll fight again if we’re forced to do so.” '
Posted by Dick Gregory at 08:55 No comments:

IDF deputy chief of staff says Syrian army ‘has ceased to exist’ and that Hezbollah’s casualties are significantly higher than previously believed.

It would be more accurate to say that ISIS has joined the fight against the anti-Assad forces around Aleppo.
"ISIS isn’t part of the rebel coalition operating in Idlib, but has
joined the fight against Assad’s forces around the major cities
of Homs and Aleppo. The Arab media is full of speculation that
the rebels are also planning a new offensive in southern Syria,
near the city of Daraa.

In response to the recent defeats it has suffered, the regime has stepped up its airstrikes – including a massive use of barrel bombs, which cause heavy civilian casualties.
Speaking at a conference in Tel Aviv, Golan said that from Israel’s perspective, the strategic situation on the northern border “may be better than ever before,” despite the many potential threats, because thousands of Hezbollah fighters are busy in Syria and the Syrian Army has effectively ceased to exist.
Nevertheless, he added, this convenient situation is unlikely to last. Meanwhile, Hezbollah “has acquired operational capabilities that no terrorist organization ever had in the past.” And while Syrian rebels aren’t currently targeting Israel from the Golan Heights, that, too, could change, he warned."
Posted by Dick Gregory at 17:43 No comments: "Some rebels have questioned why U.S.-led forces bombing Islamic State in Syria and Iraq have not focused on bombing the jihadists around Aleppo city."

The Pietà of Syria


"The massacres perpetrated by the Assad regime against his people -- Sunni Arabs, Kurds, Assyrians and others -- touch him deeply and he tries to convey their pain and suffering to the international community, which he said, “did nothing to help the Syrians.”
But Omar also wants to leave a note of hope that a better Syria will emerge from all the destruction and death – which is why a dove appears in many of his paintings: “The blood of the youth that was shed will not go to waste. It will lead to freedom, dignity and peace.” "
Posted by Dick Gregory at 09:25 No comments:

Syrian Doctor: Assad’s Barrel Bombs Have Us Fearing the Sun

" “People now, in Syria, consider the sun as a hateful thing,” the doctor, referred to in the video by the name Majed to protect his safety, says. “Because a sunny day means that the military jet can move freely, and can hit more targets, and kill more people.”
Majed then describes the terrifying 30-second span spent watching the bomb drop from a helicopter to the ground: “It will be horrible.” "

Posted by Dick Gregory at 09:18 No comments:


"The news comes as ISIS is marching on the suburbs of Aleppo, Syria's second-largest city. Rebels currently fighting the jihadists there told The Daily Beast that the U.S.-led coalition isn't even bothering to respond to their calls for airstrikes to stop the jihadist army.
“[My men] don’t want to be beholden to this policy because it can be used against them in Syria—that they’ve betrayed the revolution and now they’re just mercenaries for the coalition forces,” Sejari said.
Sejari has worked for years with the so-called "joint operations command" in Turkey, where the CIA and a host of Western and regional spy agencies have coordinated with vetted moderate rebels—sometimes arming them, although without the stifling proscription on whom they couldn’t fight. “In the past, we got some support through the [Western-backed] Friends of Syria group. Very small amounts. We were hoping there would be more support from the Americans,” Sefjari said.
“The American intelligence services have a fair idea who the good guys and bad guys are in Syria and they know which groups are fighting both extremism and dictatorship,” Sejari said. “If the Obama administration were sincere in putting an end to the suffering of the Syrian people, they could do that in three months.”

“The Syrian-American community asked the Obama Administration for airstrikes on ISIS near Marea many months ago,” complained Mohammed al-Ghanem, the senior political advisor for the Syrian American Council, a Washington, D.C.-based opposition group in constant contact with the Aleppo Military Council. “We were rebuffed for the astounding reason that aiding the rebels in Aleppo would hurt Assad, which would anger the Iranians, who might then turn up the heat on U.S. troops in Iraq. The rebels are the only ones who can fight ISIS in northern Syria—Assad forces are losing ground rather quickly now—so I hope President Obama will reconsider his willingness to compromise the ISIS fight for the sake of an Iran deal.” "

Posted by Dick Gregory at 08:53 No comments: