The Russians have firebombed¹ suburbs of Aleppo with white phosphorus, and the last Free district of Homs that Assad hasn't razed to the ground with napalm². Not to be left out, Assad has dropped barrel bombs on Aleppo³. Where are the people who wanted to Stop the Bombing of Syria? Possibly watching the BBC's coverage, that has been so bad as to prompt a complaint from Syrians⁴.

ISIS is losing ground rapidly though, I think they may have thought that anyone liberated by the Kurdish Maoist YPG (aka "the best fighters against ISIS") would be happier with ISIS, so ISIS kept on attacking the moderate and nonideological Free Syrian Army even as they lost ground to the YPG. That now seems to have turned round, the FSA have managed to reconnect Mare'a⁵ to the Azaz corridor, and the YPG has had to give back Sheikh Issa⁶, which it blackmailed the FSA in allowing it to take last week by threatening to allow all the civilians in Mare'a to be massacred by ISIS.

'For an attentive observer it is extremely interesting to see how media organizations and leading politicians worldwide reshape their perception of the Assad regime almost on a weekly basis, depending on the selectively perceived actions of the dictator’s army and their allies.
In the beginning of 2016, before the "Cessation of Hostilities" came into effect, Assad and his forces were widely criticized for their offensives around Aleppo and in Hama and Latakia, forcing hundreds of thousands to flee their homes. Harsh words like "forced displacement", "deliberate depopulation" and even "ethnic cleansing" were used for the regime’s actions. For several weeks, Assad’s future was called into question (even a "Plan B" was publicly discussed) by politicians as well as the media. Then after February 27, the international media/policy narrative - once again - changed dramatically. Suddenly, the regime was portrayed not just as a necessary but also a reasonable partner for the future of Syria, having agreed to stop fighting moderate rebels and the population and just conducting operations vs. Jabhat al-Nusra and ISIS. Strongman Assad turned "president Assad" again, his scattered army, Russia’s jets and allied Shiite militias "Syrian government forces".

Then in the end of April, the regime’s - and Russia’s! - daily war crimes could for a while not be ignored any longer by the international media and political environment. The "#AleppoIsBurning" online campaign gained global attention and - at least for a couple of days - reminded everyone that Assad and his thugs didn’t suddenly turn into a "government" again after slaughtering more than 200.000 civilians since 2011. For a few days, "government forces" turned into the "regime helicopters" bombing markets and "the Russian air force" bombing hospitals and vital infrastructure. Governments in the EU and the US reacted by negotiating "regime of silence" with Russia, Assad and Putin should stick to. Another "success" on Syria with the "political parties" Russia and Assad, as it was sold. Despite as good as no progress and the regime still killing between 30 and 70 civilians every day, politicians like German FM Frank-Walter Steinmeier on May 9 spoke of a "clear easing of the situation", just to not comment on/fully ignore the sharp escalation shortly after which lasts until today.

Most media and politicians are lauding the "Syrian government offensive" vs. ISIS while not even mentioning the heinous attacks on Idlib city some days before with more than 50 dead and civilian infrastructure such as Idlib’s national hospital being deliberated targeted by Assad and/or Putin.
I will bring up an easy comparison, politicians and media representatives should consider when whitewashing the dictator’s image, applauding Assad’s gains vs. ISIS: If a serial killer kills another serial killer while continuing to kill innocents - every day - does this make him a righteous man? The answer is too obvious. Last but not least the core problem in Syria must not be hidden behind a hypocritical "realpolitik" approach. As Walter Russell Mead put it in late May: "Ultimately, as hideous as ISIS is, it’s a symptom of the Assad regime, rather than the root of Syria’s troubles. And ISIS will never truly be defeated until Assad is dealt with." '
Posted by Dick Gregory at 13:31 No comments:

Through Their Voices 1.10: The Dreamer’s Voice (part2) 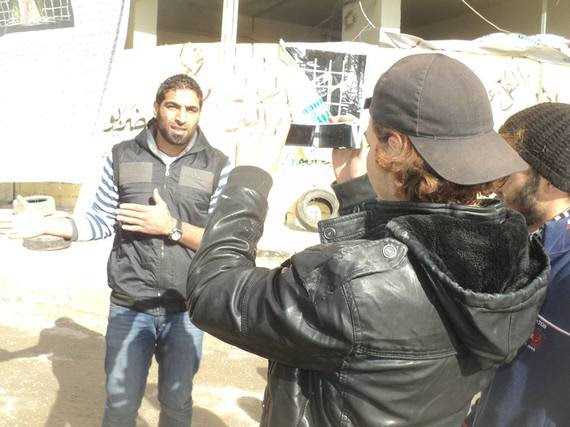 'This is part 2 of the Interview “The Dreamer’s Voice” with Ammar Ahmad.

The siege was getting worse and worse in Moaddamiyeh, and 12 civilians starved to death. People in Moaddamiyeh thought things could not become any worse until the day of the chemical attack during which the regime’s forces hit the city with chemical missiles. Ammar was awake with his friends at the morning of 21 August 2013 when they heard a strange whistling to then hear people screaming for help. They rushed to the scene and found an unknown white powder covering the street. The regime hit the basements where civilians were forced to do their prayers after they could no longer visit the mosques. It was the time of Fajer, the early Morning Prayer, and the place was crowded.
“I went downstairs and saw the people in a horrific situation, they had spasms, their irises were expanded and the way their bodies were shaking looked terrifying. Their eyes were wide open, but they seemed to be in another world. I tried to carry the person closest to me, and when I started to climb the stairs I felt I’m losing my strength. I was holding the man on my shoulder but we fell down several times. I tried to climb the stairs again, but that’s the last thing I remember. I was in a coma for almost 10 days, and after I awoke I had not been able to be fully awake for another month. That is when I learned that we were attacked with chemicals!”
Ammar was one of the casualties most serious affected by the chemical attack  that day, Moaddamiyeh losing 82 civilians overall in the so-called the chemical massacre.

After a period of time, Ammar had fully recovered and immediately went back       to support the besieged city and advocate for it. But the situation was getting  worse, especially for dozens of children who suffered from malnutrition during       to the food blockade and the long strict siege. The regime was working on a    shaky truce   which stated that the regime had to release all the detainees        from Moadamaiyeh, uphold a ceasefire, allow all the employees and students   from Moadamiyeh to go back to their work and study, remove all of the        regime’s forces who had   surrounded the city almost since mid-2011, and        open all the crossings to the city.
The regime ended up only opening the crossings to the town for a few months; arresting more than 250 civilians who tried to get in and out of the town during    that period. Meanwhile, people were allowed to bring in food, but only in       specific amounts that were only enough for one or two days.
This tactic ensured that the residents would stay hungry as they still were not     able to store food, reminding them that the town’s fate and their survival     remained in the hands of the regime. One of the regime’s conditions for the       truce was raising the regime’s flag on the highest place inside Moaddamiyeh considered a symbol of victory.
“That day I cried like a little baby! That wasn’t what we aimed for! We lost more than
2,500 martyrs and more than 1,500 are still detained. I felt so shattered, but we didn’t
have any other choice after we were so utterly disappointed of the international efforts.”

Ammar and his fellows are currently working to help the residents who are       living under the regime’s siege. The city has almost 45,000 inhabitants—a   massive amount of people for these activists to help. Ammar needs to be multitasking; the people can see him everywhere as he tries to help in many     areas and always lending a hand when one is needed. 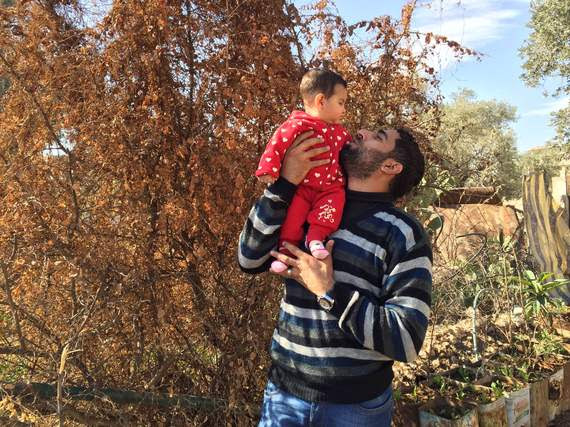 Ammar Ahmad with his daughter Mela. Moaddamiyeh 2016. Photo: Private
And yet, Moaddamiyeh, along with thirteen other areas, is currently under        siege again. After all, people in Moaddamiyeh are planting to defeat the          siege. Ammar is now married and he has a beautiful baby girl named Mela. Despite everything he went through life went on. But he is as determined              as he had been in 2011, when he told me:
“I dream of a Syria without weapons and without oppression. We are a  peaceful people, but we were forced to hold weapons to defend our            lives and our families. Weapons were the last choice after almost five     decades of Assad reign. It’s not like any other place in the world. Dozens     were killed in Syria while holding roses and banners in the          demonstrations. Weapons were held in Syria to defend the peaceful life         we were seeking when we demonstrated against Assad. After all that   happened I still believe I might be close to my dreams, maybe closer           than I’ve ever thought.”
Ammar finished our conversation adding: “What we need in Syria is to get            rid of Assad and when that happens I can assure that nobody is going to            see any more weapons. The Syrians hate weapons and once we are done        with Assad, they are going back to their colleges, their careers and their        normal life, the normal life that they were never able to live under a regime         that suspected every three people talking in street to be part of an opposition talking politics. We asked for human rights and they now forced us to ask for humanitarian aids. That was never part of our plans! Syrians need to get           what they first asked for.” '
Posted by Dick Gregory at 08:57 No comments:

'Refugees living in North Lanarkshire were invited to play in the "cup of kindness" football tournament on Friday in Airdrie which saw mixed teams including ten Syrian refugees and staff from organisations involved in the resettlement programme compete in an integration event.

Speaking through an interpreter, Syrian refugee, Mansour Zalaf, 49, said: "We were in Syria during the war. It was such a terrible life being under the torture and detention of the regime. We have been received very well. Very good treatment. Treated very well and we have felt very welcome."

Also speaking through an interpreter, Syrian refugee, Chadii Amiri, 31, said: "There's a big difference from being in Syria. The first thing is the quietness and safety. The most important thing is the equal opportunities. There is no difference between wealthy and poorer men, so everyone is equal."

A 23-year-old Syrian refugee, who did not wish to be named for fear of what might happen to his existing family in Syria under the Assad regime, spoke of his experiences arriving in Scotland.

"I am feeling sad as family still in Syria. I feel better here. All my friends here is very good. Every person if I need help will help me. Thank you so much to every person who has helped every Syrian person." '

Posted by Dick Gregory at 08:01 No comments:

'Syria’s rebels have inflicted the third significant defeat in two months on pro-Assad forces south of Aleppo city. In a sudden offensive on Friday, the Jaish al-Fatah rebel bloc overran Iranian forces and Iranian-led Iraqi and Afghan militia east and south of Khan Tuman, close to the Aleppo-to-Damascus highway.

Among the positions captured were a large military fuel depot and Iranian weapons stores. Four villages — Khirbat Mirata, al-Qarassi, al-Humayra, and Qalaajiyah (see map) were taken. Operations included two vehicle suicide bombings by Jabhat al-Nusra fighters, in which the jihadists claimed about 120 pro-Assad troops were killed.The rebels and the jihadists of Jabhat al-Nusra. succeeded despite, in the words of one local source, “Insane air attacks on the battlefield. Russia and regime deploying everything that can fly.” '
Posted by Dick Gregory at 07:41 No comments: