Meet Osama al-Ghadab, the man who was kicked by a Hungarian reporter

"Osama Abdel-Mohsen Al-Ghadab, who was a coach and former official in the Foutowa club in Deir Al-Zour in Syria, tried to evade the Hungarian border guards, carrying his child Zeid, in an attempt to reach safety; however, the scene of his obstruction and fall quickly spread like fire. Osama, who suffered a lot in the prisons of the Syrian regime after his defection and support for the revolution, was forced to leave Deir Al-Zour, escaping the violations of ISIS."
Posted by Dick Gregory at 07:28 No comments:

London's conflict cafe serves up Syria on a plate 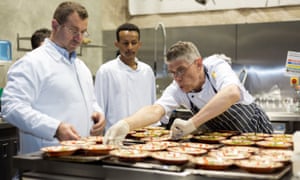 'Yassin, still in his chef’s apron, said the west should arm Syrians to get rid of Assad and Islamic State. “They need equipment. The west and the gulf states give them only enough weapons to survive,” he said. “We need anti-aircraft weapons to bring down the planes and helicopters which are dropping explosives, destroying the people. Isis, we’ll take care of them.” '
Posted by Dick Gregory at 20:30 No comments:

"We can say that the majority of Syrian refugees outside their country hail from those segments of society that are incapable of appreciating diversity and Syria's "special civilizational model". Therefore, losing them is not demographically significant. The real loss is that of the urban patriotic segments".
I dedicate this paragraph to all the idiots of the global Stalinist left who continue to support the Assad regime and its allies. Ethnic cleansing based on 'civilizational' worth is right up your alley, it seems.
Posted by Dick Gregory at 18:55 No comments:

"Daraa is where Syria's revolution began four years ago. Now it's the scene of a forgotten war, in which largely secular Free Syrian Army (FSA) rebels — marginalized elsewhere in Syria — continue to lead the struggle against Bashar al-Assad's regime.
The FSA are fighting a bitterly hard battle under a virtual media blackout to change the course of Syria's civil war. If they can take Daraa, they will stand at the beginning of the road to Damascus, the seat of Assad's government.
VICE News follows the Fallujah Horan brigade of the FSA and their charismatic commander Abu Hadi Aboud as they fight to push the regime out of Daraa's eastern suburbs.
In part one of a two-part series, Abu Hadi shows VICE News how his men take the fight to the regime on the front lines east of Daraa, and we also meet the volunteers trying to save locals from the barrel bombs that rain down daily on the city."

The Southern Storm Offensive: The Battle for Syria's South (Part 2)

Posted by Dick Gregory at 13:14 No comments:

A message from a Syrian refugee in Germany

"Recently, I have heard in the media, that the Syrians are immigrating to Europe, because of ISIS or Jabhat al-Nusra. This is not correct. We leave Syria because there is no safety there, because the Assad régime keeps hurting us."
Posted by Dick Gregory at 15:43 No comments:

"People look to the skies expecting an airstrike at any time"


Yasmine Nahlawi: "They are there because they have no other option. They've fled a war zone, at least speaking about the Syrians that are there; they have fled a situation where people look to the skies expecting an airstrike at any time, they look to the skies expecting chemical weapons to be dropped on them. They are there because they have no other option, and we see these images, we saw the image of the little boy washed up on the Turkish shore, and people would not put themselves or their children at risk unless there was something very powerful they were fleeing.
We'd obviously like the government to take in more refugees, to step up to its responsibility and take in more refugees; but more importantly, I think, we'd also like to see more concerted action on the international level to address the underlying root cause of the conflict in Syria. We've had a régime that's been massacring our people for the past four years, and until that stops there are going to be more refugees. We want people to be safe in their homes, but if they are not, and obviously if the international community doesn't take action then we want them to welcome more refugees."
Posted by Dick Gregory at 11:54 No comments:

The Forgotten Millions: Syrian kids find peace at last after horrors of war

'Lilas, 5, still has a scar above her left eye where she was hit by a fragment of a bomb that killed her neighbour while she was playing outside in 2012.
Their home city of Douma, near Damascus, has been bombed by the regime of Syrian President Bashar al-Assad since war broke out between the regime and the Free Syrian Army in the city in January 2011. It is now besieged by the regime, shutting out food and other supplies. Ms Alfuoal's brother, 27, is sometimes reduced to eating grass.
Mr Slik, a pastry chef, was beaten up by soldiers several times just "because I am from Douma, because Douma started the revolution very early".

The family fled in March 2013 to Egypt, where the elected President Mohamed Morsi welcomed Syrian refugees at the time. They received US$70 ($112) a month from the United Nations High Commissioner for Refugees for the first five months. But then the funding stopped "because of finances". Morsi was toppled by a coup and the military regime now makes life a misery for the 100,000 Syrian refugees there.'
Posted by Dick Gregory at 07:35 No comments:

"The last thing Syria needs are more bombs. Syrian people need airplanes stopped from killing them. If there were no airplanes, there would be no bombing. Our problem was in one person – Assad. If the UN or a big power demanded Assad leave the it would be over. Assad and ISIS are the same. Assad and ISIS are on one side – the people of Syria are on the other. If people want to help, then solve the root of the problem."
Posted by Dick Gregory at 07:05 No comments: