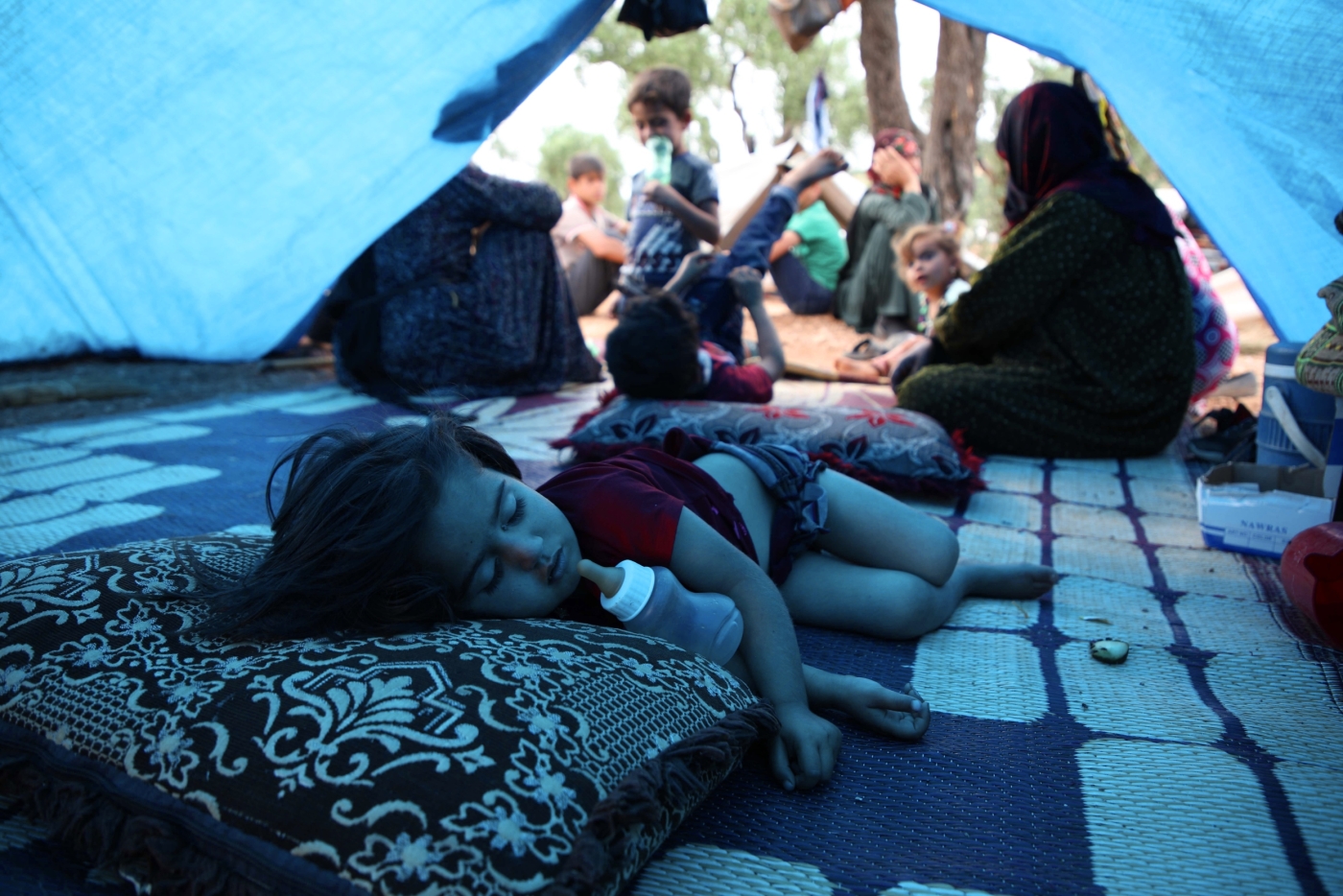 'When Hoda’s ageing father suffered a stroke last week, there was little she could do.

Anxious he would not get the care he needed in his hometown in Syria's rural Daraa province, where few doctors remain, she longed to be at his bedside. Hundreds of kilometres away in displacement, however, that was impossible.

Hoda's father recovered from the stroke, yet the family remains separated across a web of front lines and areas of control. Last week was the last time she managed to speak to him over the phone.

One year ago, Hoda's hometown in Daraa was the scene of a lightning military offensive by pro-government forces to retake the whole of the country's south from rebel control.

It was a weeks-long battle that saw the 43-year-old move from town to town seeking safety alongside her brother and his family, finally ending up as far as she could flee from oncoming government forces along the hilly borderline with the Israeli-occupied Golan Heights.

Hoda's 80-year-old father stayed behind in the family home with one of his daughters. He is simply too frail, and sickly, to travel easily, Hoda says.

Hoda had little choice but to leave him behind. She had already been detained and imprisoned by government security forces in the early years of the war, supposedly for providing "logistic support to the opposition," she says. She remained in detention for six months.

Staying behind under renewed government control could mean arrest, again, and the risk of disappearing into the government's widely feared network of prisons.

When the government organised bus convoys north from Daraa for fighters and civilians choosing to leave, she and her brother went along with them. The destination: rebel-held Idlib, long an end point for forcible evacuations from other formerly rebel-held pockets of Syria.

"I didn't feel like I could trust the regime," Hoda says, referring to a series of reconciliation deals the Syrian government carried out in former opposition-controlled towns across Daraa last year.

Now one year later, she only communicates with her father by phone, usually once every day or two. Visiting him is a distant dream, says Hoda.

Daraa has long been known among Syrians as the "cradle" of the country's revolution. It was there that popular protests broke out in 2011 following the arrest and brutal torture of more than a dozen teenagers accused of scrawling anti-government graffiti on a school wall.

The following years saw rebel forces take control of Daraa while an emerging sector of citizen journalists and media activists documented events. There were aerial bombardments, battles and mass waves of displacement.

More than eight years later, however, the rural province is under renewed, yet shaky government control.

A series of patchwork surrender-and-reconciliation agreements saw thousands of fighters and residents board government buses.

Like former residents of the Damascus suburbs and east Aleppo city, those who left now eke out a life in internal exile in the northwest, often unemployed and with few friends from home nearby.

But Daraa was unique. Unlike places such as the Damascus suburbs of Eastern Ghouta and Daraya, many former rebel commanders were allowed to stay home rather than board the evacuation buses, negotiating deals with the Syrian government and its Russian allies to maintain relative autonomy in some towns and villages.

The result is a complex web of political control in Syria's south, with restricted movement and, like elsewhere retaken by the government, communication tightly monitored.

That uneasy peace has been fraying for months. Gunmen have attacked checkpoints and other government installations, and targeted local political figures for assassination. Former residents who still speak with relatives inside Daraa say arrests are widespread. The violence has only grown in recent months.

Those in exile in Syria's northwest can do little but watch from afar.

They only communicate sporadically with family and friends who stayed behind in Daraa - getting caught by the government's security forces speaking to people in the opposition-held north could mean arrest, former residents now living in Idlib tell Middle East Eye.

Ahmad al-Hiraki works as an accountant with the Civil Defence, a rescue group commonly known as the White Helmets active in opposition-held areas of Syria.

He left his hometown in rural Daraa province one year ago, eventually settling in the town of Ariha near Idlib city. Ahmad rarely speaks with his sister, who still lives in their hometown, for fear she could the garner attention of security forces.

When he does reach out to his sister to check in on her, Ahmad messages her from his wife's mobile phone rather than his own - his phone number could be flagged by government authorities due to his work for the Civil Defence, he says.

"We speak over WhatsApp, but without sending voice messages - just text messages," Ahmad says. "Voice messages are under surveillance by the regime."

What little he does hear of home is unsettling.

Widespread arrests. House raids in the middle of the night. Drive-by assassinations. Dead bodies, including those of his own relatives, dumped outside their homes. Late last month, unknown assailants blew up a government building just outside his hometown.

Elsewhere in Ariha, 43-year-old father Marwan says he stops himself short of asking about the growing unrest back home in Daraa. Though he came north with his wife and four children last year, he still has close relatives in the south, and worries for their safety.

“We don’t ever talk politics [with family members back home],” says Marwan. He requested a pseudonym for security reasons.

Idlib province, where most of Daraa’s exiled residents ended up, now remains the last major pocket of rebel control after several years of pro-government military advances.

Today, they are living on the frontlines of yet another battle.

Idlib is home to an estimated three million Syrians, roughly half of them internally displaced from areas of the country once under rebel control.

But now the northwestern province- as well as parts of neighbouring rural Aleppo, Hama and Latakia - is facing the prospect of being the site of the next major military showdown between opposition and pro-government forces.

A deal brokered by Russia and Turkey late last year in the Russian resort city of Sochi held off a massive pro-government assault on northwestern Syria for a time, though now it’s largely irrelevant as Syrian government and Russian forces pummel the region with bombs.

The onslaught has brought life to a standstill in Idlib, former Daraa residents say. In Daraa, Ahmad remembers living as part of a community, among neighbours who looked out for one another and spent time together. The local shopkeepers all knew him by name.

“Here, we don’t know anyone,” he says. The danger of air strikes, as well as his demanding work schedule as an accountant, keeps him from meeting his neighbours. The only people he now spends time with outside work and home are a sister, who also lives in Ariha, and her family.

Even when they do gather, it’s rare that they speak of anything other than the war, and the bombing now threatening them yet again in exile.

Most recently, he says, the conversation has turned darker. Earlier this month, two people from the family’s hometown in rural Daraa were killed under bombs in Idlib, Ahmad says. They were rattled by the news.

Still, “I’d rather live under bombs [in Idlib] than be vulnerable to arrest in Daraa,” says Ahmad. He questions whether he’d ever be able to live at home again in his village, nestled among what was once quiet farmland in Syria’s southwest.

Posted by Dick Gregory at 11:56 No comments:

From Berlin to the barracks: a Syrian rebel returns home 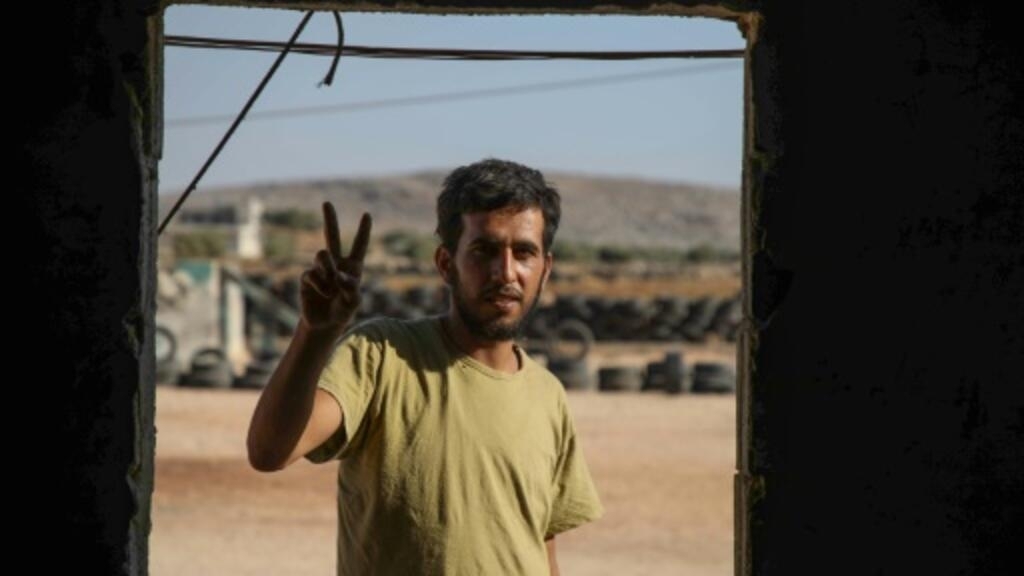 'Mohammad al-Naeemi had everything he could possibly want living in exile in Germany, but he returned to war-torn Syria anyway to fight Bashar al-Assad's régime.

Clutching a rifle to his chest, his back flat against the ground, the 23-year-old shimmies across a dry field in northwestern Syria on his graduation day from training to join an armed rebel group.

"I returned to give back to my country," said the young fighter, wearing a black T-shirt and beige combat trousers.

With an opposition group cap fit tightly on his head, he powers through push-ups, counting each one out at the top of his lungs in unison with fellow recruits.

From now on, "I'll reside in military barracks and on the front lines," he said.

"It'll be the best place I can possibly live."

Naeemi was a high school student in Syria's southern province of Quneitra when peaceful protests demanding change erupted across the country in 2011.

After a brutal crackdown on the demonstrations spiralled into war, he joined the armed opposition for several years.

In 2015, fearing a régime takeover of his region, he decided to leave his war-torn country and join his siblings in Germany, he said.

Travelling over the summer, he and friends crossed Syria's central desert to the Turkish border, before travelling by sea to Greece, and then by land onto Germany.

"I lived in Berlin. I was studying" he said.

"I had an ordinary life. I had rights like any German citizen and a monthly stipend. I wanted for nothing," he said.

"But I wasn't happy and I constantly missed my home country," he added.

Syrian government forces have taken back large swathes of the country since Russia intervened on behalf of Damascus in 2015, including Naeemi's home province of Quneitra last year.

Since late April, regime and Russian forces have ramped up their deadly bombardment of the holdout opposition bastion of Idlib.

The strikes and rocket fire have killed more than 600 civilians in the jihadist-held region of some three million people, almost half displaced by war from other parts of the country.

"The fierce regime campaign on Idlib" and a government takeover of his hometown are the main reasons Naeemi decided to head back to Syria, he said.

"My parents opposed my decision and tried to stop me from returning... but I insisted," said Naeemi, who has no relatives in Idlib.

He arrived in northwest Syria last month and immediately joined Jaysh al-Izza, a Syrian rebel group active in the north of Hama province and parts of Idlib.

He spent one month in a rebel training camp near the Bab al-Hawa crossing with Turkey, where life was governed by strict routine.

He woke up early everyday for military drills, which consisted of diving through burning tires, jumping over cement blocks and shuffling across trenches.

He also sat for classes in religion and ethics.

His unit was named after Abdel-Basset al-Sarout, a Syrian goalkeeper turned opposition fighter who died last month of wounds sustained in battle against regime forces.

The group consists mainly of fresh recruits spurred into joining rebel ranks by the latest flare up in Syria's northwest, said Mustafa Bakour, a rebel commander.

"Each one of these men has a story," he said.

With training now over, Naeemi said the "hard part" is behind him.

Looking back, he said he has no regrets.

"I liked Germany and considered it as my home but there is nowhere like my country Syria," he said.

"I don't regret my decision, I did not return for money or wealth. If money was the goal, I would have stayed in Germany." '

Posted by Dick Gregory at 11:30 No comments: