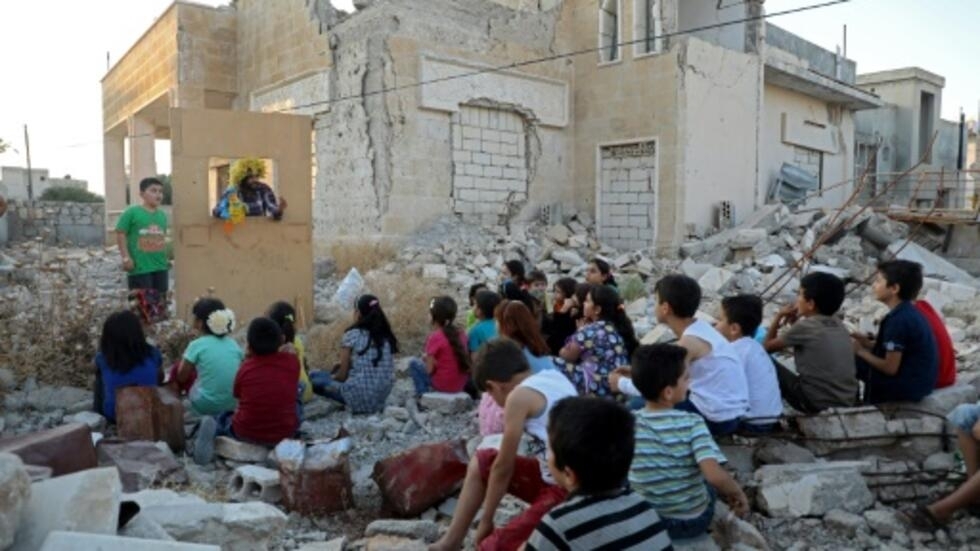 'Walid Abu Rashed walks past bombed-out buildings in war-torn northwest Syria, carrying a large wooden board and a plastic bag filled with puppets while dozens of children trail behind him.

The 26 year-old's mobile puppet theatre has become a small respite from war for the children of Saraqib, a town in the opposition-held province of Idlib.

After school, they gather amidst the rubble, clapping their hands, as the theatre actor puts on a show from behind his makeshift puppet stand, a flashy yellow wig covering his black hair.

The war-weary children sing along to a tune blasting from a speaker as hand puppets of a lion and a mouse pop up from a square hole carved at the centre of the wooden board.

"How sweet it is to live well and in peace," they chant in unison.

Packing up his kit after the show, Abu Rashed says theatre is a form of resistance.

"Theatre is an integral part of the culture and civilisation of Idlib," he said, as the children around him clamoured for pictures.

"I will fight tyrants through art."

Nearby, 10-year-old Mina Malak said the show had offered her much-needed relief.

"His shows make us laugh," she said. "It helps us forget the bombardment."

Years of fighting and displacement in Idlib province have wrought chaos for children, destroying schools and scattering destitute families across the countryside.

Hundreds of people have been displaced since April alone, when the government and its Russian backer upped their deadly bombardment of the enclave.

According to Save The Children, the bombing since late April has damaged or otherwise impacted around 90 educational facilities, while dozens more are being used as shelters for those displaced by the violence.

Before the Syrian Revolution started in 2011, Abu Rashed wanted to attend the Higher Institute for Dramatic Arts in Damascus -- the country's most prominent theatre school.

"I won the award for best theatre actor in Idlib in 2011 and the horizons of my future in the arts started to take shape," he said, lighting a cigarette.

"But I chose to stand with the revolution and join the protesters, because theatre can deliver a message under oppressive rule."

Instead of attending university, he joined a troupe of theatre actors by the name of the Magic Caravan.

They performed plays for out-of-school children living in displacement camps near the border with Turkey, before disbanding in 2014 after their founder was killed by a régime barrel bomb that fell near Abu Rashed's home.

A few months later, Abu Rashed organised his first solo puppet show in a camp for the displaced in the countryside of neighbouring Latakia province.

"I couldn't hold back my tears when I heard the long applause after the show ended," he said.

"At that moment, I decided to continue performing in every spot in Syria I could reach."

He has since become a mainstay in Saraqib, where frequent power cuts have left children with few sources of entertainment.

He recalled a recent exchange with a young member of his audience, who asked him why his toys at home didn't speak the same way Abu Rashed's puppets do.

"He insisted that his toys participate in the next show so they can learn how to speak and dance," Abu Rashed said.

While he holds most of his shows outside, the puppet master has recently turned the basement of his home into an alternative performance space for when the bombing spikes.

Gathering outdoors during heavy air strikes, he said, is akin to suicide.

But that does not deter him.

"I promise you these shows will not stop," he said.'

Posted by Dick Gregory at 09:12 No comments: