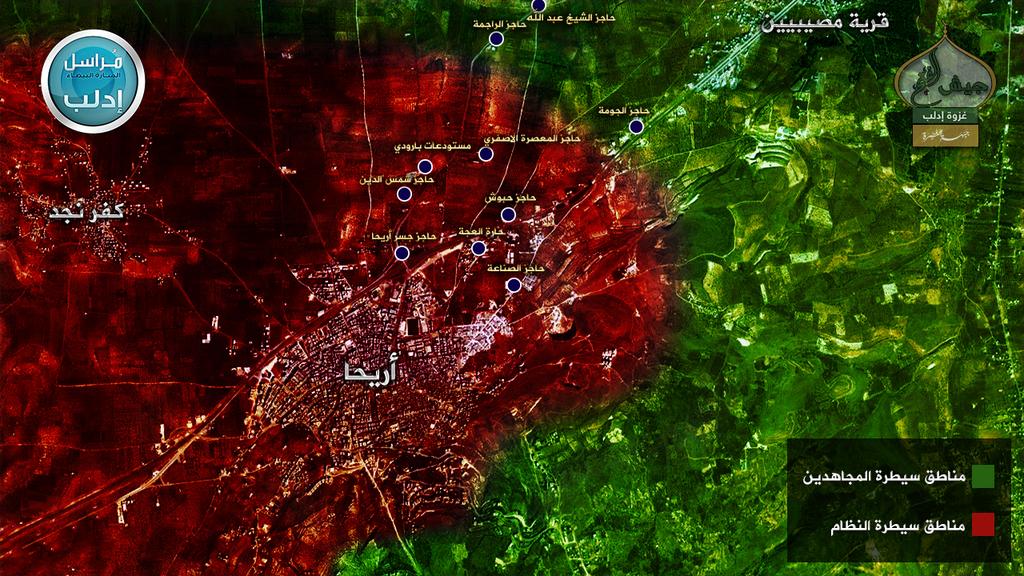 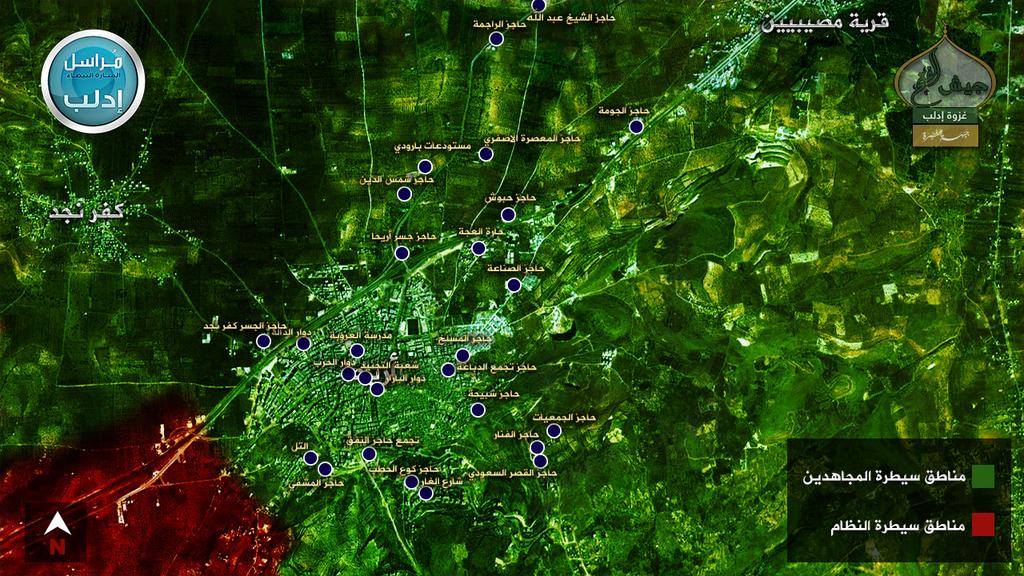 Absolutely remarkable "Jaish al-Fateh captured the major Idlib city of Ariha in 2hrs."
Posted by Dick Gregory at 19:34 No comments:

" “In Adra on the northern outskirts of Damascus in early 2014, I witnessed [Nusra] forces storm a housing complex by advancing through a drainage pipe which came out behind government lines, where they proceeded to kill Alawites and Christians.” Cockburn was witnessing a war crime.
But there is a problem. The atrocity might or might not have happened but Cockburn certainly didn’t witness it.
Long before he placed himself at the center of the episode, Cockburn wrote about it in his January 28, 2014 column for The Independent. By his own account, he arrived in Adra after the alleged massacre and he was told the story about rebels advancing through a drainage pipe and massacring civilians by “a Syrian [regime] soldier, who gave his name as Abu Ali.”

For Cockburn, the situation in Syria is stark: you are with the regime or you are with the terrorists. He is an enthusiast for the war on terror—Bashar al-Assad’s war on terror. He criticizes the U.S. for excluding from its anti-ISIS coalition “almost all those actually fighting ISIS, including Iran, the Syrian army, the Syrian Kurds and the Shia militias in Iraq.” “The enemy of our enemy”, he insists, “must be our friend”—and those who reject this formula are “glib” and “shallow”.
He even gets to speak to “a local FSA commander” (at that point, Cockburn was still acknowledging the FSA), who tells Cockburn that he changed sides “because of general disillusionment with the uprising.”
Only later are we told: “Listening to [the FSA rebel] impassively were Syrian army officers.”

Cockburn gives no indication that he is troubled by the officers’ presence while he interviews a surrendered soldier.  Far from it. The trip leads him to conclude: “The only way to bring the political temperature down is by local ceasefires and peace deals.” Syria would be at peace, in other words, if all Syrians just re-submitted to regime rule.
Cockburn is only following the precedent of his illustrious colleague Robert Fisk who, in August 2012, after a massacre of 400-500 people in Daraya, rode a Syrian Army armoured personnel carrier to the scene, interviewed survivors—“in the company of armed Syrian forces”—and concluded that, contrary to initial reports, “armed insurgents rather than Syrian troops” were responsible for the massacre.
Veteran war correspondent Janine di Giovanni, however, visited the town unaccompanied and interviewed survivors without the menacing presence of the Syrian Army. They told di Giovanni that the massacre was carried out by the regime, a conclusion corroborated by Human Rights Watch.
At their best, journalists exhume truth, as Seymour Hersh did after the massacre in My Lai. At their worst, they try to bury it, as Seymour Hersh did after the massacre in Eastern Ghouta.  Six months after a clumsy attempt at mass-crime revisionism, Hersh blurbed Cockburn’s book. Generous praise from Hersh would once have counted as an honour; after Syria, it has turned into an indictment."
Posted by Dick Gregory at 12:42 No comments: 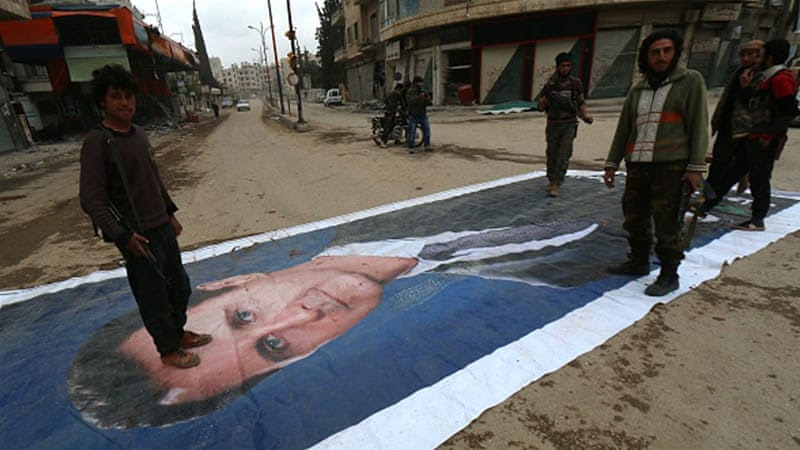 Bashar al-Assad: The beginning of the end?
"Assad has lost much of his power when he failed to deter or scare people into submission in the first few months of the uprising.
And once he used force and failed to defeat his enemies, and then failed again when using terrible and illegal violence against civilians and fighters alike, it all signalled that his time was up, and the countdown had started for his demise.
If he survives at all, Assad will be a tidbit militia leader for a bit longer."
Pretty much. There is renewed reporting that the régime would accept a partition of the country*, but it has no basis in reality; If the régime were to abandon Western Aleppo to the threat of terrorist massacres, then how can it pretend to be the protector of Syrians, one of its few remaining claims to legitimacy? Especially when those massacres don't take place.
Hassan Nasrallah is in trouble**, "Hezbollah’s war in Syria is an Iranian war, and a lost cause too. Hezbollah’s fighters will later see that Tehran will have to sell them out." The War Nerd*** is still providing the educated but stupid with an analysis that says Assad can go on, because the Alawite community are right behind him.
*[https://www.dailystar.com.lb/News/Middle-East/2015/May-25/299191-syria-regime-likely-to-accept-de-facto-partition-of-country.ashx]**[http://www.aawsat.net/2015/05/article55343619/opinion-morons-and-traitors]***[http://pando.com/2015/05/23/the-war-nerd-doing-the-math-on-alawite-casualty-numbers/]

Posted by Dick Gregory at 11:25 No comments: I saw massacre of children, says defecting Syrian air force officer
Three years ago now, this was the first major massacre of Assad's war against Syria. Assad sent his soldiers door-to-door to massacre Sunni Muslims, with the message that either Bashar stayed in power, or they would burn the country.
The régime lied, said it was the Free Syrian Army's work. And the world watched not sure to believe*. And when the truth became irrefutable, it was said to be just another massacre in a war where atrocities are committed by all sides. This is a pattern that was already well established by the time of Assad's chemical attacks of August 2013, throw sand in the world's face to obscure Assad's responsibility, and then congratulate yourselves for preventing a war by the lack of response. That's been what much of the left, abetted by much of the Western media, has done, and it has enabled Assad to intensify his war, and spread the catastrophe to neighbouring countries. The subtitle of this piece, "As UN envoy warns of all-out war", is in that vein, as if Assad's war to keep himself in power will relent as long as we don't over-react.
*[http://www.spiegel.de/international/world/a-look-back-at-the-houla-massacre-in-syria-a-845854.html]
Posted by Dick Gregory at 10:35 No comments:

"Ahrar Al-Sham leaders spoke out in support of Jabhat al-Nusrah after Coalition airstrikes on their bases."
Posted by Dick Gregory at 19:15 No comments: