'Abdulaziz Almashi, co-founder of the Syria solidarity movement that opposes President Bashar al-Assad, said Corbyn’s comments were hypocritical because STW is not opposing the Syrian leader: “If Jeremy Corbyn believes Stop the War is one of most democratic movements in this country then why don’t Stop the War support the democratic movement against the dictator Assad, who came to power illegally?”

Almashi is a constituent of Corbyn and was quoted approvingly by the Labour leader during his House of Commons speech against bombing ISIS targets in Syria. But he told BuzzFeed News that Stop the War would not listen to his movement because they were anti-Assad: “I am a Syrian. I am against bombing of my country. Jeremy Corbyn I believe and respect him but Stop the War coalition are wrong when it comes to Syrian crisis.
“They don’t recognise the Syrian people have started a peaceful revolution. Why has Stop the War never organised a demo against the Syrian regime? Why don’t they organise a demo outside the Russian embassy against their intervention? “If they are anti-intervention they cannot be selective in their anti-intervention,” he added.'
Posted by Dick Gregory at 04:29 No comments:

“The people here are terrorized by both ISIS and the Syrian regime, and it’s important to understand that.” In fact, many Aleppo residents are afraid to discuss the Islamic State for fear the group could track them down, he said. “There is a constant worry in talking about ISIS … They know that ISIS will kill them if they ever came back to these areas and they knew that they had been talking,” '
Posted by Dick Gregory at 04:20 No comments:

Wondering in Syrian City About Future After Truce

'When rebels and security forces struck a truce recently that could end the blockade trapping him in the last rebel-held district in the city of Homs, pastry chef turned antigovernment activist, Bebars al-Talawy did not feel safer or freer. Instead, he was sure it meant choosing surrender or death, calling it the start of “the final countdown to the end of my life.”

If he stays, he fears arrest, by the government or by rebel leaders who have made deals with it. If he goes, that means accepting safe passage to insurgent-held areas still pounded by Syrian, Russian and American airstrikes. Though security forces will not be inside the district, he said, “they have power over the rebels inside,” enough to make them round up the wanted and the draft dodgers. “They will get rid of all rebels who joined the revolution,” he said. “We will be liquidated one by one.”

At night, he said, he walks in the outskirts of Waer. Sometimes he goes to a park, sometimes to a destroyed gas station where he once hid from security forces. “I like sitting there, digging up memories,” he said. “Sometimes I listen to the Quran, sometimes to revolutionary songs, to help me be more patient. This is all because of the Dara’a children,” he said, sarcastically blaming the boys in that southern city, whose arrests in 2011, for scrawling antigovernment slogans on walls, set off early protests. “They should ban selling spray paint to children.” '

Posted by Dick Gregory at 04:05 No comments:

The West's Dilemma: Why Assad Is Uninterested in Defeating Islamic State

"Sunday, Nov. 29, was market day in Ariha, a small city located in the northwestern Syrian province of Idlib. The people shopping at the market didn't stand a chance. Just seconds after the roar of the approaching Russian Sukhoi fighter jet first became audible, the first bombs struck. They killed passersby, vegetable sellers and entire families. "I saw torn up bodies flying around and children calling for their parents," said a civil defense rescuer hours after the attack.

Jets from both Syria and Russia continue unhindered to bomb markets, hospitals, bakeries and pretty much any other place where people gather in the provinces that are under rebel control. Two years ago, Russia voted in favor of United Nations Resolution 2139, which was supposed to bring an end to attacks on Syrian civilians. But that hasn't prevented Russia from flying hundreds of exactly those kinds of bombing raids itself since the end of September. And that, in turn, hasn't prevented France from talking to Russia about the possibility of conducting coordinated air strikes and joining together in the fight against Islamic State.

Moscow had been hoping that massive air strikes would force rebel fighters in opposition-held areas to abandon the fight. That would then pave the way for Assad's ground forces to advance and take back those regions. But in October, when Assad's tank units rolled into those areas that Russian jets had previously bombed, they didn't get very far. Instead of fleeing, rebels there had dug in instead.

Near the northern Syrian city of Tal Rifaat in early November, an IS suicide attacker detonated his car bomb at an FSA base, though without causing much damage. Just half an hour later, two witnesses say, Russian jets attacked the same base for the first time. Was it a coincidence? Likely not. There have been dozens of cases since 2014 in which Assad's troops and IS have apparently been coordinating attacks on rebel groups, with the air force bombing them from above and IS firing at them from the ground.

Sending ground troops into such a situation, or even lending legitimacy to the Russian-Syrian offensive, would unwittingly transform Europe into Assad's vassals. Beyond that, the dictator would have to be given troop reinforcements so that he could halfway successfully advance against the enemy.

Even if one were to ignore all of the military problems, there is also a significant moral question: Would the West really want to go into battle with a regime that has used, aside from nuclear weapons, pretty much every weapon imaginable against its own populace in an effort to cling to power? And once Islamic State is defeated and driven away, what should happen with the cities -- such as Raqqa, Deir el-Zour, al-Bab, Manbij and Abu Kamal -- that they now hold? All those cities had been take over by local rebels long before Islamic State moved in. Who should such areas be given to?

Certainly not to Assad. That would merely turn the clock back on this war by three years. Rebel groups would once again try to throw out Assad's troops -- and ultimately Islamic State would strike again."
Posted by Dick Gregory at 23:45 No comments:

As a Syrian, I know there's only one way to defeat Isis 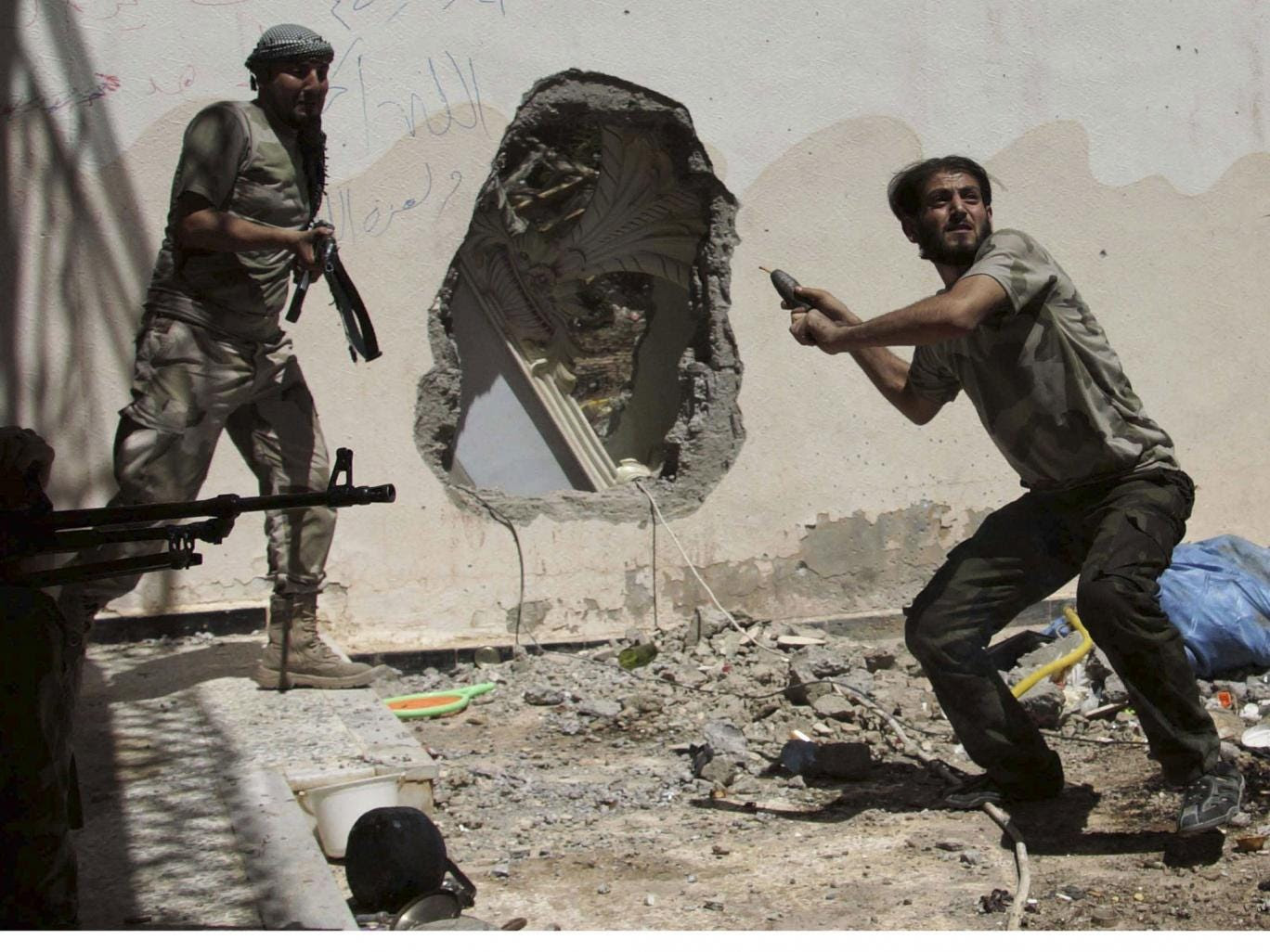 Posted by Dick Gregory at 18:02 No comments:

Syrian refugee talks about his experiences

'Zaid Ojjeh is glad that he is in America and safe from the fate befalling many of his Syrian countrymen in their war-ravaged homeland. In Syria, “every day it was getting worse and worse,” he said in an interview before his talk. There people knew not to talk about politics or their ruler, Bashar al-Assad, whose father had ruled the country before him. You never talk about the president,” said Ojjeh. “He’s like God. It’s been like that for 40 years.” A friend of his had a conversation about Assad with his parents and that friend was arrested, said Ojjeh.

“I heard from him how much he was tortured,” said Ojjeh. His older brother was drafted into the Syrian military and saw horrible things, but escaped and is trying to leave the country, he said. However, his parents remain in Syria.
“All my friends left the country,” he said. “Either you’re with the government or against them … People can’t go back anymore. Everything is gone. I want everybody to understand these people are just running for their lives,” said Ojjeh, about his fellow Syrian refugees. “You don’t have to be scared. People just want a place to live. A lot of my friends got killed by gas or by things that fall out of a plane (bombs),” he said. “ISIS is not Islam. It is not religious.” '
Posted by Dick Gregory at 07:36 No comments:

They terrorized my daughters and killed my baby. That’s why we’re Syrian refugees.

"Peaceful protesters began asking for improvements from the government — basic things, fundamental rights. Among other things, they were calling for the release of political prisoners and for an end to the government’s corruption. My husband and I were not revolutionaries. We respected the role of the government in our lives, but we agreed that changes were needed and believed those changes could happen peacefully. Our family did not participate in the protests. We watched from our house.

The demonstrators were not terrorists. They didn’t carry weapons; they carried signs calling for a better life. I remember seeing people with olive branches and flowers, symbols of peace. So the government’s reaction came as a terrible surprise. Soldiers began using violence to silence the voice of the people, shooting them in the streets. A war between the people and the government had begun.

One day, my 7-year-old came home petrified about something she had seen. She told me the soldiers had pulled random students and people from the street and lined them up on their hands and knees, in two rows, in front of the tanks. They were not allowed to move. The soldiers in the tanks threatened to run them over and taunted those who were watching. Before, I tried to ease my daughters’ fear by telling them that things would get better. Now I could no longer say this. After that day, I stopped sending my daughters to school.

In the fall of 2012, I gave birth to a beautiful baby boy, our first son. He was born with jaundice, and we had to take him to the Al Fateh Hospital occasionally for treatment.  A family friend who worked at the hospital called us. The government believed that a rebel was hiding there, he said, so troops shelled the building. Many children were dead. My 7-day-old son was among them."

Posted by Dick Gregory at 01:36 No comments:


"This petition is an open source and can be used by all stakeholders involved in the Syrian political and negotiation process"
Posted by Dick Gregory at 01:07 No comments: