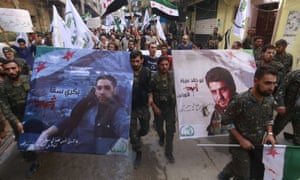 'Until now Iran had tried to avoid a public show of its role in the war, fearing that it would be portrayed as a Shia invasion force, amplifying already febrile sectarian tensions. Mohammed al-Sheikh, a senior member of an FSA-aligned unit called Division 1, said: “We know that, if the Iranians bomb us, it would be the start of the third world war. Everyone from the Arab world would come and join us, because it would be a Persian attack on Syria. This is why the regime has played it smartly, by bringing in the Russians.
For the regime, Aleppo is the economic hub. If we lose Aleppo, it doesn’t mean we lose the war, it means we lost a phase. Our friends understand the gravity of the situation, but their hands are tied by politics and international agreements. We are the Syrians who are losing on a daily basis because of these politics. If we look at who has what in Syria, you will see that Isis is only controlling the desert, and it is worthless. Yes, they have oil and water, but now we are controlling the core of Syria and that’s why the regime is crying for help.”
“We are confused about the Americans,” said Malafji. “We can only see the Americans active near the Kurdish areas, but not anywhere else.” From a base in Aleppo’s southeast, not far from the city’s airport that is still used by the regime, Abdur Rahman, a long-term member of an Islamist unit, said: “We used to dream about the sound of F-16s. But for us it’s just the Syrian planes, and the deeper roar of the Russian jets. That’s our fate.” '
Posted by Dick Gregory at 19:05 No comments:

'The first Russian airstrikes in Syria targeted Talbiseh, a rebel-held village in the northern suburbs of Homs, killing 30 civilians and 3 children. That Sunni community has been a hotbed of anti-Assad activity since early 2011, and for the past few months, its residents have been resisting advances by nearby ISIS. Just before Russia bombed Talbiseh, ISIS assassinated 3 of the town’s Sunni clerics because they had rallied local rebel fighters and residents to fight ISIS. Russia’s attacks on these anti-ISIS communities effectively makes Russia the air force of ISIS.

By eliminating the moderates and empowering ISIS, Putin is forcing Obama to accept Assad’s role in the fight against ISIS and in a future Syria. Sadly, it seems Obama has succumbed to Putin’s strategy even if it means that ISIS will win, at least in the short term. On Monday, the administration’s spokesman for Operation Inherent Resolve, Army Colonel Steve Warren, said: "We have seen ISIL make progress based on Russian airstrikes." The next day, White House spokesman Josh Earnest reminded reporters that countering Russia's involvement in Syria is not a high priority. Combined, these statements are a tragic admission of Obama’s resignation to accepting ISIS because of his unwillingness to confront Putin and Assad.

The White House should be worried now, not only that the policy goal of a Geneva-type Syrian peace process has become impossible, but that Putin’s actions may have destroyed all hopes of defeating ISIS too. Though many Syrians want to fight ISIS, their first priority is to stop the number one killer of civilians: the regime’s barrel bombs, which now have Russian backing. The no-fly zone that Syrian rebels need in order to focus on fighting ISIS is needed now more than ever, but it has also become more difficult and less likely due to the newest player in Syria’s skies. And while Russia targets the anti-ISIS rebels in Idlib, Latakia, and Aleppo, it is openly challenging radical Islamists from around the world to a fight that the Syrian people will pay the price for.
Obama long ago abdicated the U.S.’s moral imperative to protect Syrian civilians, and to promote peace. Now he is also capitulating to Putin on a core strategic imperative by failing to recognize and confront Russia’s empowerment of ISIS. This may be the final nail in the coffin of the US’s fight against ISIS, which has already been a complete failure due to micromanagement of the anti-ISIS airstrikes and a laughably misguided train-and-equip program. Any hope of ending this horrible conflict--or even just defeating ISIS--has now been lost, and all that a generation of Syrians will remember is that U.S. and Russian warplanes joined the Assad regime in bombing their country to oblivion.'
Posted by Dick Gregory at 13:56 No comments:

Russia is the newest Syria bully

'Unfortunately, the SRD hospital is not the only hospital Russian jets have targeted. At the beginning of their campaign, Russian jets targeted three hospitals near the Turkish border including two hospitals that provided services to civilians and children.

In this latest Russian assault on Aleppo, the collusion game between the Assad regime, and #ISIS has apparently widened to now include Russia. Without the assistance of both Russia and Assad, it is highly unlikely that Daesh (ISIS) would be able to seize five villages on the northern edge of Aleppo from Syrian rebels. The Syrian rebels have recently been empowered with new weapons from the Turkish – Saudi Arabia – Qatar coalition, backed by the US.
In the starkest testimony of how ISIS is favored by the Assad regime, Shahba Press Agency, a Free Syrian News Agency, reported about a dissident Abu Uys Libyan who defected from Daesh with other dissidents. Nazeer Al-Khatib, Editor at Shahba Press Agency, said, “The interview of the Libyan defector exposed Daesh and its operations was a slap in the organization's (Daesh’s) face. He witnessed and exposed the game that ISIS is playing throughout the region.”
Abu Uys Libyan said, “We were with ISIS for several months and were fortified only a hundred meters from the regime’s army. They (Daesh) did not make any move against Assad’s army and the regime did not make any move against them. Not a shot was fired on us.”
Nazeer al-Khatib said, "Surrendering the free areas and surrounding areas to the regime is another spoof that the regime and ISIS are executing through their mutual agreement." Abu Libyan spoke of Daesh and the regime “seizing then dividing areas that are held by the Sunnis.” Nazeer said that the Libyan dissidents went to al-Nusra.'
Posted by Dick Gregory at 14:48 No comments:

The Israel-Russia ‘Axis of Resistance’: Its place in regional geopolitics

Michael Karadjis
"Iran, Russia and Israel have the same fundamental view on Syria.
Of course, Iran and Israel haven’t much looked like they do over 2013-2015. That’s because Israel and Iran have a clash over the broader region, which then gets partly played out in Syria when Iranian proxy forces (eg Hezbollah) get close to the stolen Golan, or when Iranian missiles are getting moved across Syria to Hezbollah in Lebanon. But that’s not really about Syria, or Assad, as such; that’s about Assad’s survival becoming increasingly dependent on the Iranian occupation.
So what do I mean the three countries, including two declared enemies, “agree” on Syria?
Basically, Plan A is that the the Assad regime must be preserved, and if possible restored to control over larger areas of Syria, as the power to look after their interests in Syria. These interests include, for Russia, its Mediterranean naval bases in Tartous on the north coast; for Iran, its connection to Hezbollah in Lebanon via the Qalamoun region between the Lebanese border and Damascus; for Israel, restoration of Assad to his role as best border cop protecting Israel’s control over the Golan.
More generally, all three are threatened by a revolutionary uprising dominated by the largely Sunni Arab masses of Syria, but then again, so are the Gulf states, Turkey, US imperialism etc, without such specific interests; and all three, like their mutual friend al-Sisi of Egypt, are particularly good at using “anti-jihadist” language to justify this stance.
However, if this is impossible, then Plan B calls for the creation of an Alawite-dominated statelet (even if unofficial), consisting of the heavily Alawite coastal provinces (Latakia and Tartous) through the Lebanese border region (Homs and the Qalamoun) down to Damascus. Such a sectarian partition would aim to keep the “great unwashed” Sunni masses of “jihadists” (ie, the worker-peasant Sunni Arab majority, the backbone of the revolution) at bay behind defensible lines.
Such a statelet would serve the key Iranian interest, which is centred on the Qalamoun, and the key Russian interest, which is centred on the coast. But if it didn’t reach beyond Damascus down to the Golan “border,” it would not be able to serve the key Israeli interest."
Posted by Dick Gregory at 14:23 No comments:

'Vladimir Putin can face little resistance if he bombs an ambulance in Idlib when a US gunship incinerates a hospital in Kunduz. Bashar Al Assad can get away with murder because he has conveniently pronounced his opponents “terrorists”.

The conflict in Syria is often described as a “proxy war” between the US and Russia. Syrian rebels are rarely mentioned without the obligatory prefix “US-backed”. (The regime army on the other hand isn’t often described as “Russian-backed”.) The backing, though tangible, takes distinctly different forms; and the support that the contending parties have received reflects the character of their patrons.
Not used to doing things by half, Russia has supplied the Syrian regime with bombers, gunships, armour and missiles. The US, on the other hand, has spent many years trying to ensure that no anti-aircraft weapon would reach Syrian rebels lest it affect its ally Israel’s ability to bomb Syria with impunity. Instead, its support has taken the form of non-lethal aid, such as night-vision goggles and satellite phones. It took many years before it supplied outdated TOW anti-tank missiles but has refrained from passing on any game-changing technology.
On several occasions, US officials’ commitment to the war on terror ideology has obliged them to welcome Russia as a potential partner against ISIL. Little thought is given to the toll this might extract, given Russia’s looser definition of a terrorist, and what an emboldened Mr Putin might do next.
“In all times and places,” said Thomas Hobbes, “nature abhors a vacuum.” The vacuum Mr Obama left in Syria has been filled by Mr Putin. This is now Mr Obama’s legacy: the abyss gazing back. At least we can now recognise that the war on terror is also a war of terror.'
Posted by Dick Gregory at 20:16 No comments: