"Syrian regime airstrikes pounded Aleppo and Idlib Friday as anti-regime protesters called for foreign military intervention in the country, while rebel groups said they had ended the presence ofISIS jihadis in eastern Damascus after a 24-hour campaign.

One protester, in the town of Saqba outside Damascus, held a sign saying that the hoped-for intervention would rid Syria of “Iranian occupation.” "
As did the one in the picture, so you might focus on their desire to stop foreign occupation of their country. And ISIS would never have got into the eastern suburbs of Damascus without, guess what, Assad letting them.
Posted by Dick Gregory at 23:12 No comments:

on civilians as villagers are treated following gas attacks


Patrick Cockburn is still trying to spin things for Assad, but it is an uphill struggle.

"The Syrian air force is notorious for responding to rebel attacks by indiscriminate bombing of any area it believes to be in rebel hands."
As if they don't know which areas are in rebel hands.
"The use of poison gas may be a measure of Syrian desperation." Syrian government desperation. As if his opponents were the foreigners, rather than the militias keeping him in place. It might be a typo, as there was another in the sentence.
"Syrian helicopters are alleged to have dropped bombs on the city itself." Given that there is an eyewitness, who else could have dropped it?
"Jabhat al-Nusra and other opposition groups such as Ahrar al-Sham."  That he's having to mention other opposition groups rather than making out it is all about al-Qaida seems like a sign that he has seen how unconvincing he'd become.
"With Jabhat al-Nusra making advances in the north and Islamic Fighters taking over most of Yarmouk Palestinian Camp,  the government has suffered a series of reverses." The reverse the government seems to have suffered is that ISIS were forced out of the camp without it having to be surrendered to Assad's forces.
"Despite a shortage of recruits, it is, however, expected to launch a counter-offensive to recapture Idlib." By who exactly?
"As the fighting intensifies the government is likely to use any weapon it can get its hands on, including chemical weapons." As it has all along, because it is an illegitimate government that has destroyed its social base and had to replace almost all consent with control, which can only destroy the country and torture and murder what is left. The Syrian people need the means to resist such destruction, not have their resistance pretended to be dragging the West into a war, nothing more than exiles in five-star Turkish hotels or nothing but Islamic extremism. That's how Syria got to be such a mess. And as Assad has trouble recruiting an army, he can be stopped if only his foreign intervention is stopped.

Posted by Dick Gregory at 22:47 No comments:

Syrian Notebooks: Inside the

"On his return, Littell warned Alain Juppe, then French foreign minister, that “the regime was doing its utmost to provoke cycles of sectarian violence while the FSA was frantically trying to contain them; born out of despair the Islamist temptation was growing but had yet to gain any serious ground.” Tragically, Islamic State is one consequence of the West’s inaction."
Posted by Dick Gregory at 16:08 No comments: 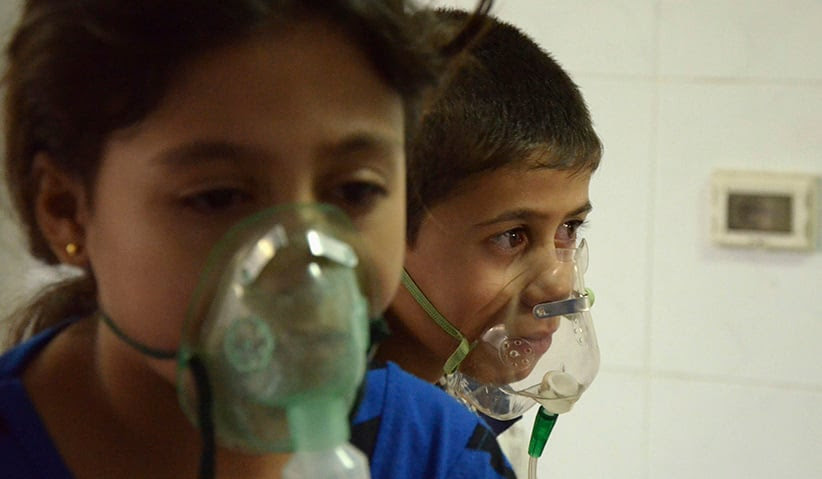 Why we’re failing to hold Bashar al-Assad to account


"Assad is still gassing children to death. We’re still letting him get away with it. Those wondering why the West has so few friends among Syrian rebels might want to start there."
Posted by Dick Gregory at 15:55 No comments:

A man mourns next to a body wrapped in shrouds following reported air strikes by government forces on a rebel held area in the northern Syrian city of Aleppo on April 17, 2015.
Posted by Dick Gregory at 18:19 No comments:

"The regime decided that if it was going to lose Idlib, then the prisoners in its dungeons weren’t going to taste freedom at all. If they couldn’t have Idlib, nobody could. 15 prisoners were summarily executed in the flight from the city. Thankfully the Free Men of the Levant (حركة أحرار الشام الإسلامية ‎ Ahrār ash-Shām) movement freed some 53 overjoyed prisoners from regime hellholes. The liberation was greeted with joy by the civilians of Idlib city, having lived under regime control for three years.Free Syrian Army men were slaughtered with car bombs, beheadings and torture, while Syrian army units sat nearby, completely untouched. While Assad’s army attacked them in  Aleppo from one side, Da’esh terrorists assaulted them from the other side. Did Da’esh even deal any genuine blows to the regime? Study maps by Arabthomness from before and after they entered Syria, and come to your own conclusion.

What should have been touted to the increasingly ignorant world as a major source of hope for the Syrian revolution, and a wake-up call to those claiming the Free Syrian Army somehow doesn’t exist any more (in that case, the author has many invisible friends) turned into a pathetic knee-jerk reaction; a repetitive, regurgitated cascade of rubbish which demonising Syrian fighters from all walks of life that united to free a city from the Assad regime (including Christians, Druze, and FSA groups) as “al-Qaeda”."
Posted by Dick Gregory at 08:40 No comments:

FSA: NUSRA ‘NEEDS TO ACT AND

SPLIT OFF FROM AL-QAIDA’


"The harsh language in these announcements is not intended as a declaration of war. Rather, it is intended as a strong push for Nusra to determine its options and take steps [to benefit] the Syrian revolution, and break its ties with al-Qaida."
Posted by Dick Gregory at 22:12 No comments:

In the Middle East, our enemy's enemy must be our friend

Al-Qaeda-type movements are gaining ground, and there's only one way to stop them

Patrick Cockburn adopts the disastrous justification for the War on Terror wholesale. Never mind it is the dictators that give rise to the extremists, never mind that in Assad's case he has been supporting them directly. Never mind that the people of Idlib feel liberated by Jabhat al-Nusra in a way they do not with Assad or his friends in ISIS. The idea that we should be bombing Idlib to keep Assad in power is flat out crazy, but the logical conclusion of saying the problem is not Assad but American intervention is to whitewash Assad's crimes so you can pretend the alternatives are worse.

"In Syria, similarly, “the enemy of our enemy” and the strongest military force is the Syrian army, though it shows signs of weakening after four years of war. But if we have decided that US air power is not to be used against Isis or Jabhat al-Nusra when they are fighting the Syrian army because we want to get rid of President Bashar al-Assad, then this is a decision that benefits Isis, Jabhat al-Nusra and extreme jihadis."
Posted by Dick Gregory at 18:35 1 comment: