'Prisoners are suffering different types of brutal torture that the human mind cannot imagine at the Syrian régime dungeons, according to former detainees.

Muhammed Abdullah said he was arrested for participating in pro-democracy protests in the early days of the Syrian uprising in 2011.

Abdullah was taken into custody along with his mother and father during a régime raid in Morik district in the northern Hama province on July 8, 2011.

"They burned my father's vehicle and his shop and took us to the intelligence unit at the Hama military base, where 80 people were held in a narrow ward,” Abdullah recalled.

"They interrogated the three of us," he said. "We were beaten in the presence of each other."

Abdullah said that he was held at a small prison cell less than one square meter for 50 days.

"They gave me only a piece of bread with olive grains from the cell window," he recalled.

"They were dropping water. I had to open my mouth and catch up while the water was dropping. Otherwise I would be dehydrated," Abdullah said.

After 50 days in detention, Abdullah was taken to a ward in the Mezzeh military base.

Highlighting that he was questioned for 68 days at the ward, Abdullah said: "The sound of those who were tortured was terrible."

"They locked us up in a room in where about 800 people were naked. The scenery was horrible. There were 60 children among us," he recalled.

"People either died of grief or torture or went crazy," he said.

"The warden used to rape a child from our ward every day,” he said.

"One day, 40 people with masks and batons raided the ward. We were trying to escape by pressing each other. They were beating us to death.

"Twenty-two people died that day,” Abdullah said, adding that this scene will always remain in his memory.

Abdullah was finally released in poor health conditions as part of a prisoner exchange with the Syrian régime.

"My kidneys and lungs were infected. I threw up blood for a year,” Abdullah said.

Returning to Syria after two months of treatment in Turkey, Abdullah was unable to sleep regularly for a year.

A woman, who was formerly jailed by the Syrian régime on charges of treating civilians injured in régime attacks, also highlighted the cruel torture methods during incarceration in régime prisons.

Meryem Hileyf was detained on Sept. 27, 2012 from her home in the northern Hama province.

"They ruined my life. We had the same pain every day,” Hileyf said.

“The most painful moment was when they wanted us to undress. We figured they weren't undressing us for questioning," she said.

Held in an underground cell, Hileyf said: “They put me in a tiny cell. There was water dripping from a tap. The sound of the water was imprinted on our brains.”

“A torturer, called Lieutenant Colonel Suleyman, used to take beautiful girls to his room every day at midnight. We heard the girls screaming for help, but we couldn't do anything,” she recalled.

"'Let the Free Syrian Army (FSA) come and save you', they said while torturing us," Hileyf said.

The Syrian woman was released as part of a prisoner swap between the FSA and Syrian régime.

"My husband divorced me. My mother hasn't spoken with me for eight years," she said.

Stressing that she has been crying for her sufferings for eight years, Hileyf said: "People asked me if I was raped instead of asking if I need help."

Praising Turkey’s help, she said: “I've attempted suicide three times. Only Turkey looked out for me. Turkey is my second mother.” '

Posted by Dick Gregory at 09:38 No comments: 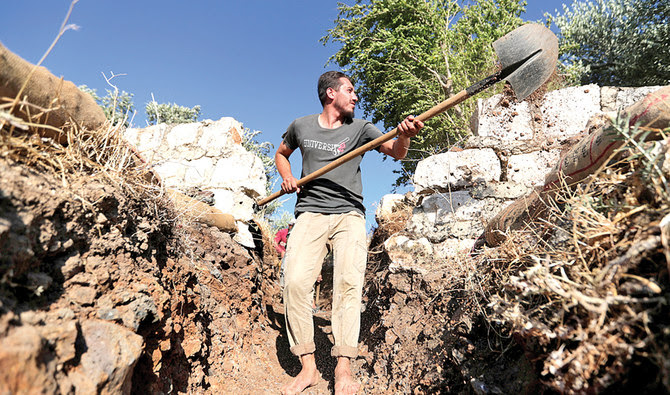 'Away from the frontlines, volunteers are helping in the war against Syria’s Bashar Assad by cooking, filling sandbags, collecting old tires and digging trenches, aiming to help ward off his assault on northwestern Syria.

It is part of the civilian effort to help defend the last major opposition stronghold from Assad and his Russian allies who have been pounding it for weeks.

Abu Abdo, 51, says he is playing his part by collecting old tires to be burned by fighters to create a smoke screen from hostile warplanes.

“We go to places where tires are repaired, collect them and take them to the fighters,” said Abu Abdo, 51, as he piled tires into the back of a truck with the help of his sons in the town of Salqin.

“These tires have no value but protect (the fighters) and keep the enemy busy,” said Abu Abdo, as two of sons sat atop the pile of tires in the back of the truck.

In recent years, Assad’s opponents have poured into northwestern Syria from other parts of Syria that have been taken from opposition. The region, which includes Idlib province and parts of neighboring provinces, has an estimated 3 million inhabitants, about half of whom had already fled fighting elsewhere according to the UN.

With nowhere else for these people to flee, many have a stake in fending off the attack on the northwest. To this end, activists and religious leaders launched a campaign in May called “fire an arrow with them.”

Volunteers at work in a kitchen in the town of Atarib are preparing 2,000 meals a day for fighters as part of the campaign. Yellow rice is spooned from large vats into polystyrene trays and lentil soup is poured into bags ready for delivery to fighters.

“The car leaves from here to the frontlines under airstrikes and surveillance sometimes,” said a 40-year-old man at work in the kitchen who gave his name as Abu Wael. “God willing we continue so these meals reach the fighters.”

At a nearby quarry, sacks that once contained rice were being filled with grit for use as sandbag defenses.

“We are filling according to the demand of the frontline. The command center, for example, requests 200 bags or 1,000 bags for one position,” said Khaled Al-Jamal, 26, at work with a group of other volunteers.

He finished his high school education but was unable to register at university once the war began in 2011. He hopes his effort will help fighters so “all their effort is directed at repelling the regime.”

In Salqin, men use shovels, pick axes and pneumatic drills to dig a trench in an olive grove as part of another civilian campaign, this one called “the Popular Resistance Battalions.”

A long way from the frontline, Yehya Al-Sheikh, 38, says the trench he is digging with others will provide protection from airstrikes for a family living nearby.

“We came to dig trenches to defend ourselves and our people and to support our Mujahideen brothers against Bashar Assad.” '

Posted by Dick Gregory at 08:32 No comments: