Syrian opposition rejoice in the death of the terrorist Qasem Soleimani 'The Syrian opposition on Friday hailed the killing of top Iranian and Iraqi commanders in a US strike. The strike outside Baghdad airport killed top Iranian commander Qasem Soleimani and the deputy chief of Iraq's pro-Iran paramilitary organisation, Abu Mahdi al-Muhandis.

Soleimani had been a key backer of Bashar al-Assad and helped him save his position after an uprising that began in 2011 threatened to topple his regime.

He was Iran's pointman in organising Iranian forces and their Shiite-dominated foreign proxies on the Syrian battlefield and a frequent visitor to Damascus.

Thanks to the support of Iran and its proxies as well as to the decisive 2015 military intervention of Russia, Assad has clawed back most of the territory he lost in the early stages of the war.

In the few areas still that still escape the regime's control, some Syrians celebrated the death of a man they hold responsible for thousands of civilians deaths.

During a weekly Friday protest in the northwestern city of Idlib, one demonstrator held a placard that read: "We rejoice in the death of the terrorist Qasem Soleimani. Thank you Trump."

Others handed out sweets to celebrate Soleimani's death.

Leaders of Syrian opposition groups for their part hailed the death of a man they blame for thousands for thousands of deaths in the nearly nine-year-old civil war.

"The murder of Qasem Soleimani, the number one perpetrator of Revolutionary Guards' crimes against the people of Syria and Iraq, is a blow that confirms that the world is able to stop Iran and protect Syrian civilians if it wants to," Nasr Hariri, a senior political opposition leader, said.

Posted by Dick Gregory at 13:12 No comments: 'Syrian demonstrators took to the streets on Friday (January 3) in Idlib city center, chanting anti-Russia and Assad militia slogans and confirming the continuity of the Syrian revolution and condemning Assad and Russian bombardment on Idlib.

The demonstrators expressed their sympathy and support to the forcibly displaced persons from Maarat al-Nuaman city.

They asked the international community to press Assad regime and Russia to stop killing civilians and to release the detainees.

Last week, thousands of Syrian demonstrators and activists worldwide took to the streets in more than 50 cities and capitals worldwide chanting anti-Russia and Assad militia slogans and condemning Putin and Assad crimes in Syria.

Assad-Russian warplanes have committed dozens of massacres in Idlib and Hama countryside since they launched their bombing campaign on the 30th of April, largely violating the de-escalation zone deal reached between Russia and Turkey.' 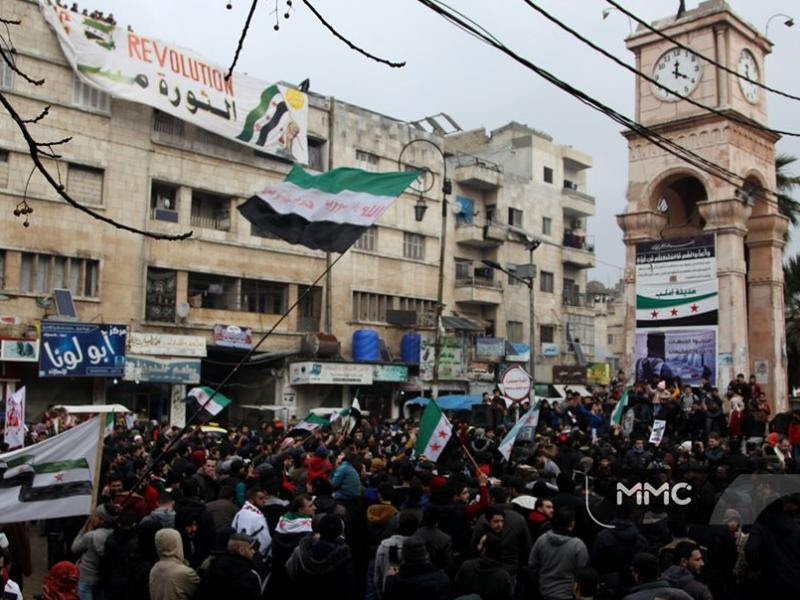 Posted by Dick Gregory at 11:53 No comments:

Russia’s role in Syria is sinister; it’s an occupier with an iron grip

'As we enter a new year and a new decade, the Syrian conflict rages on, well into its ninth year. The estimated death toll is touching one million, with over ten million others displaced both internally and externally, from a pre-war population of around 23 million in 2011. The role of the regime of Bashar Al-Assad in suppressing protests and attempting to crush the rebellion is well understood, but far less has been mentioned about Russia’s intervention in the conflict.

Russia intervened militarily in Assad’s favour in 2015, although in reality it was backing the regime diplomatically from the onset. It has used its UN Security Council veto 14 times on the Syrian issue in the past 9 years and blocked any attempt to hold the government accountable for its crimes. Whilst the west was offering a veneer of hope for the uprising, Russia made no secret of its support for the regime. The military intervention is now an occupation which has tipped the scales in favour of the regime; the Russian Foreign Minister himself said that if it were not for their intervention, Assad and his government would have collapsed in a matter of weeks. And although Russia claimed that its intervention was to attack Daesh in eastern Syria, most air strikes targeted opposition held areas that had no link to Daesh or jihadist groups whatsoever. When Russia entered Ghouta, for example, there were no Daesh fighters, but it made no secret of its intervention in that area.

There is an extremely strong case to be made against Russian President Vladimir Putin for committing war crimes in Syria. Multiple hospitals have been hit by Russian forces in a brazen attempt to terrify opposition-held areas into submission. There was a particularly well known instance in which the UN gave Russia the coordinates for hospitals in northern Syria specifically to avoid hitting them by accident; Russian air strikes still hit the hospitals in what was clearly a war crime. More than 50 hospitals have been hit in the past 6 months as Russia continues its campaign of fear against the Syrian population, and although the UN has failed the Syrian people on many occasions, the New York Times has just published a very powerful report investigating the many incidents where Russian and Assad forces deliberately attacked hospitals and schools in the north of Syria.

There is a measure of irony here; Russia has played up its “diplomatic” role during the crisis by hosting the Astana Process on Syria and brokering the Sochi agreement back in the autumn. It claimed that it was the major power behind persuading Assad to get rid of his chemical weapon stockpile in 2013 after a massacre. Any attempt to play honest broker by Putin offers a thin veil of legitimacy and is quickly broken down by Russia’s military might behind Assad’s recent victories on the battlefield.

Delving deeper into Putin’s mind, it is clear that he views Syria as a client state. The Russian leader himself was a KGB agent of the Soviet Union for over 15 years and is well versed in the mechanics of a totalitarian state. The Syrian city of Tartus on the Mediterranean Sea hosts a Russian naval base, its only port outside Russia itself. The Litvinenko murder in 2006 and Skripal poisonings in 2018 in Britain demonstrated how Russia will stop at nothing to punish any dissent. The example of the Russian invasion and annexation of Crimea in 2014 showed that borders are an abstract concept for the Russian state and are in no way respected. Is a state like this trusted to bring justice to Syria and to lead any reconciliation process?


Nine years in, and Syrians see the conflict beyond simply a revolution against the Assad regime. The situation on the ground in Syria is akin to an invasion by Russia and Iran, with the former dictating the course of the war. This is not dissimilar to the situation of Afghanistan in the early 1990s when Najibullah was president with the Soviet Union there as the occupier and decision maker. Moreover, Putin himself claimed that he has used the war in Syria to test Russian weaponry and develop artillery at the expense of the Syrian people. Putin even arranged for Assad to visit Moscow during the conflict on a military aircraft in an act which underlined how weak the Syrian leader really is. This was by no means the only humiliation that Assad suffered at the hands of Russia, as he was essentially treated like a puppet on his own soil. Russian forces are not simply limited to the sky; they have been witnessed on the ground in Syria patrolling checkpoints and acting as a quasi-secret police service.

As well as diplomatic and military interventions, Russia’s control over the Assad regime extends to directing the system of Syria’s government. Russia has authority over the political and economic decisions taken by the Syrian government which has gone beyond simple military decision-making. Putin is pulling the strings in Syria and the Syrian people are beginning to view the conflict through the lens of independence from Iran and Russia and their Syrian cronies; independence to plan their own course on and into the future.'

Posted by Dick Gregory at 22:32 No comments: