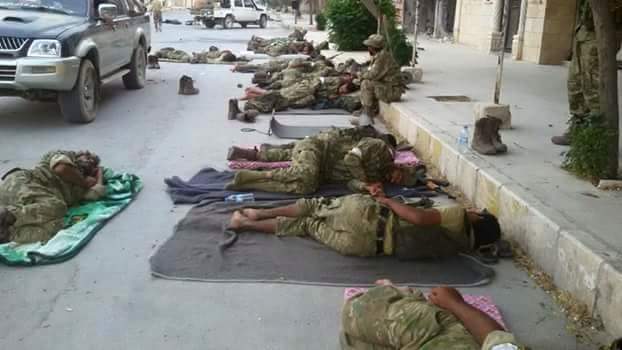 "The FSA slept on the street in Jarabulus."

Rather than occupy the houses of the displaced residents.
Posted by Dick Gregory at 08:55 No comments: 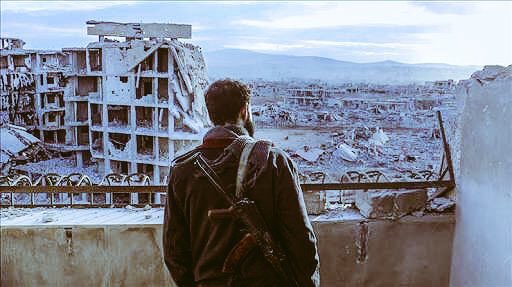 Abdurahman Hark:
"The besieged city fought off regime elite forces of 4th Division for 4 years. 1000s of Assadis were killed at its walls."

Sami:
"Daraya civilians (who regime said never existed) will be evacuated to Sahnaya & Ma'araba tomorrow, rebels will follow the day after to Idlib. Daraya will always be the symbol of our revolution. Don't ask why they surrendered, but ask how they resisted & survived all these years."
[https://twitter.com/Paradoxy13/status/768848178795913217]
[https://twitter.com/Paradoxy13/status/768847307106377728]
Posted by Dick Gregory at 18:43 No comments:

Aleppo's Children: What One Father Lost to Syria's Civil War 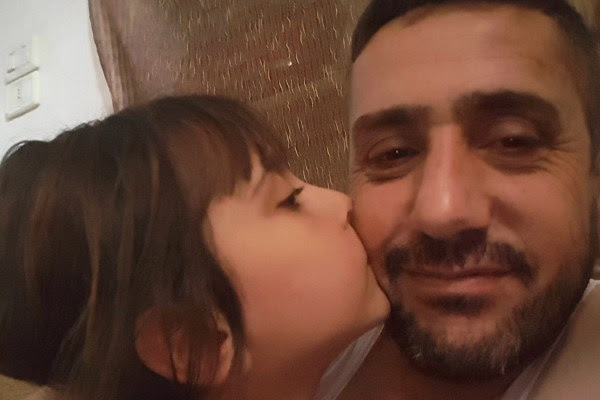 'Ali Abuljud's children ran through the archways of Aleppo, toy guns in hand.

They took pretend shots at each other across the courtyards. One child poked at his brother's back with a plastic rifle.
"Come on and walk with us," he said, leading his brother away to a fake jail.
It's a version of the cruel scene they had grown accustomed to seeing in the war-torn Syrian city.
"We are the children of the Syrian Revolution," one of the kids said. "We're recreating everything happening in the city, and the things people are doing."
Chants of "Allahu Akbar" — or "God is great" — followed.
But only a few days later, there would be no more games.
A barrel bomb struck around 3 a.m. on Saturday, killing the four siblings: Aysha, 12, Mohammad 11, Obeida, 9, and Afraa, 7.
Abuljud implored his friends not to focus on his children's death.
"Don't look at this generation like this," he said. "This generation looks up in the sky and sees these Russian airplanes [backing Syrian President Bashar al-Assad], just looking up in the sky as they drop bombs. This generation is going to be titans! I swear they will never be afraid of anything, thank God!"
As Abuljud walked back to what was left of his home, he said he did not want the world to feel sorry for him.
"I want our voices — not just my voice — but for all of our voices to reach the entire world," Abuljud said.'

Posted by Dick Gregory at 06:16 No comments:

'Why then is there such surprise that, despite all reports of régime atrocities in Syria, no people of no nation seem able to work up enduring outrage?  Report what you like, and soon you will get the reaction inculcated in us for decades:  well yes, but doesn't the other side commit terrible crimes?  Won't atrocities always be with us until we learn to respect international law?  Isn't it suspiciously hysterical to scream about this one offender?

Policy analysts refashion this into a mantra replete with adolescent wisdom:  there are no good guys in Syria.  This slides easily into:  let's just back whoever we like, however much we like, for our own interests.  "Our own interests" means, for US governments, what won't upset the voters.  That in turn means no serious commitment in Syria, because that would entail either American deaths and great expense, or arming 'Arabs'.  So already the moralizing has important effects on policy.

There is another, equally damaging effect:  the almost universally accepted convention that when it comes to atrocity, we don't need to know the details.  It's all criminal, isn't it?  Why wallow in sadism and cruelty?  This is why, for instance, the Caesar archive of photos, widely distributed, has had no impact - and why so many see no reason to view them.  They are supposed to force people to confront Syria's realities but the fact is, they don't.  They are supposed to present details but the fact is, they do no such thing.  We see emaciated corpses, some with injuries.  That doesn't tell us how these people died, and zero tolerance tells us:  "well, aren't people dying all over in this terrible conflict?   Don't people die terrible deaths worldwide?  Why then should these pictures tell us anything about what should happen in Syria.? After all, isn't it just a question of backing one bad guy rather than another?  After all, why should Americans die to clean up a mess created by a bunch of bad guys running around killing each other?  Can we really change the sort of society that generates these crimes?  Is it really our job to do so?"

Imagine that people did actually examine and compare the record of the various parties to the Syrian conflict.  They might find reasons why it is not only morally permissible but morally obligatory, at times, to give full military support to people who commit war crimes and violate human rights.  That realization can occur only when people stop saying it's all the same and really look at the details of atrocities.

The worst atrocities are almost never reported.  Incredibly, the latest Amnesty International account of torture in Syrian jails specifies the details of only of cases which are mild by Assad's standards.  Perhaps here again, to report worse is thought merely prurient by an agency known for its 'even-handedness', that is, its refusal to compare.

For Assad, barrel bombs are a mere convenience.  Before the barrel bombs, his forces didn't kill children from the sky.  They took knives and slit the throats of babies and toddlers.  There are photographs and well-confirmed reports of this for anyone who takes the trouble to find them.

The refusal to compare and its consequent avoidance of details conceals uncomfortable facts.  ISIS' beheadings that so shock the world take moments; they are humane compared to the slow deaths Assad's torturers have inflicted on victims as young as 11.  Bombing hospitals is indeed terrible:  before the bombings, régime troops invaded the hospitals on foot and tortured people in their hospital beds.  And the tortures of Abu Ghraib are love pats compared to what Assad inflicts on human flesh.

To these qualitative comparisons must be added quantitative ones.  Assad murders and tortures many times more people than any other participant in the conflict.  To first preach about the awfulness of atrocities, and then assign no weight to how many human beings suffer them, is nothing short of bizarre.

It's hardly a surprise that honest comparisons are avoided: the conclusions they compel are so unwelcome.  But they loom large because they point to a crossroads of morality and political realism.  The fact - it is a fact - is that ISIS, which conducts massacres, beheads people, blows up civilians, executes by burning alive and throws homosexuals off buildings - is, according to all reports on the scale and nature of the atrocities, much less brutal than the Syrian government.  That is not a world it is in anyone's interest to legitimate and therefore to perpetuate.  Before Assad we already lived with fine declarations masking pathetically low real standards governing how we treat one another.  To let Assad remain in power - or his entire régime minus the man himself - is to lower standards even more.  The fact that many prefer ISIS' horrible rule to his own is clear evidence what dangers lie in the refusal to compare.'

Posted by Dick Gregory at 16:12 No comments:

Assad is terrified of the children


Aleppo man who lost his entire family
in Assad régime barrel bomb attack: "I'm not going to even bother calling on the UN, or Arab or western leaders. My message is to the people, your turn will come. To all the people of the world if you don't protest, the same thing that happened to us will happen to you. My children have gone to paradise, and our revolution will succeed regardless if the powers that be said yes or no. Assad is terrified of the children because he knows this generation will fight & defeat him."

Posted by Dick Gregory at 06:18 No comments: