'In rebel-controlled areas of the city of Aleppo, two sides of Syria’s revolution have cohered more effectively in recent weeks, with less friction between the civilians and the armed groups. The local city council in Aleppo is one of several hundred councils functioning in rebel-held towns and villages across Syria, some elected in rudimentary-run polls, others not. It has made significant progress in gaining control from the armed groups of much of the governance of insurgent-held districts, including distribution of humanitarian aid and organizing basic public services, says Eyad Kalloul, a development worker with the Muwatana, a pro-opposition but independent Syrian NGO. Kalloul, a father of two, cites as a recent example the control of a neighborhood water well.


“We asked why the well should be controlled by a militia instead of the council,” he says. “And after negotiations involving local notables as well, the militia agreed.” He adds: “The aim is to get all civil services under civilian control.”
Progress defining areas of civilian responsibility — from the provision of water and electricity to health care and education — has been easier in the city of Aleppo thanks to the recent departure of fighters with Jabhat al-Nusra, the al-Qaida affiliate that is the most reluctant of the armed groups in northern Syria to relinquish any power to civilians, a reflection of the jihadists’ theocratic beliefs.
According to Gen. Salim Idris, former chief of the staff of the Western-backed Free Syrian Army, al-Nusra has withdrawn many fighters from Aleppo, fearing it could suffer major losses if the government, backed by the Russians, do mount a major assault on rebel districts.
In neighboring Idlib province, civilians have been much more restricted in what they can do. Foreign donors have been reluctant to provide funds for civilian projects there, from reconstruction to relief services, fearing al-Nusra entanglement.
​“Al-Nusra doesn’t want to talk to us because we are secular,” says Kalloul, speaking in English, which he learned as a detainee in Syria’s notorious Sednaya prison by listening to VOA on a smuggled radio.
A one-time Communist, he says English wasn’t the only thing he learned during his five years in jail. Debating in prison with other detainees, reading and being exposed to news from around the world, his political views changed.

He now describes himself as a liberal, but says prison debates equipped him with the skills that now help him to facilitate talks between civilians and armed militias that hold opposing political views.
Setting up a justice system in the rebel-held areas has proved difficult.

”Justice is much more complicated than who oversees the provision of basic services and even education,” Kalloul explains. In different districts, there are different and often competing courts. “Civilians have asked for a unified court system across rebel-held areas and one controlled by civilians and not the armed groups,” he says.'

Posted by Dick Gregory at 07:55 No comments:

"I find it fucking appalling that the main stream media has not picked up the fact that Russian jet fighters have brought down Idlib's National Hospital.
An air strike was performed on the facility killing dozens and leaving over 150 injured, It has become clear that there is a systematic approach to targeting any facilities that can ensure any form of security for civilians."
Posted by Dick Gregory at 05:51 No comments:

'Covered in his own blood, his hands mangled, Ahmed Jamili begged the doctors not to cut up his clothes. The child, 9, was just one of the victims as the Syrian government pounded rebel strongholds with hundreds of air strikes.

"My dad only bought them [the clothes] yesterday," Ahmed sobbed. "Please don't cut my clothes."
He had been playing outside in the rebel-held district of Al-Sakhour in Aleppo when government war planes dropped their bombs. His two brothers were killed. A building close by collapsed entirely.
Civil Defence volunteers said that in 48 hours, Syrian government forces launched more than 700 air strikes on rebel-held areas of Aleppo city, and across the province. It is part of a concerted government assault on some of the last major rebel strongholds: Aleppo, Homs and Daraya. There has been a high civilian toll, with many children and babies among the dead and injured.
Aid groups said suffering in Daraya is compounded by the refusal of Syrian President Bashar al-Assad's forces to let aid convoys into the city. The United Nations said it may not be able to go ahead with planned aid drops, saying it would be too dangerous without the Syrian government's cooperation.'
Posted by Dick Gregory at 14:03 No comments: 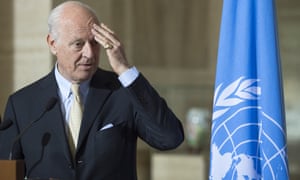 'The UN special envoy for Syria, Staffan de Mistura, appeared to backtrack on airdrops at a press conference last week, the day before he announced no further peace talks were possible for at least three weeks due to the breakdown in the cessation of hostilities. He said: “It is clear from the briefing that we got that in order for airdrops to become concrete either by delivery at high altitude or by helicopters, there is a need for the cooperation of the government of Syria.”

The apparent reversal was condemned by the former Liberal Democrat leader Paddy Ashdown, who said: “The deadline set by the ISSG poses a serious question. Are the words of the international community meant to mean anything? We would all much rather airdrops did not have to be contemplated – they are complex operations – but if the 1 June deadline passes without ground convoys getting in then the UK has to see that the international commitment to the people of Syria is fulfilled. Not only are lives on the line, so is the credibility of the ISSG.”

Jason McCartney, the Conservative MP for Colne Valley and a former RAF officer, said: “We are at the stage of last resort where airdrops – however imperfect – are the only way to save lives.”

Jo Cox, the Labour MP who has raised the issue of airdrops most consistently, said: “If the words of the foreign secretary and the international community don’t turn to action, if we don’t see aid getting in by road or by air, then we’ve reached a new low making empty promises to starving children.” '

The left of the Labour Party could not be reached for comment.
Posted by Dick Gregory at 19:50 No comments: