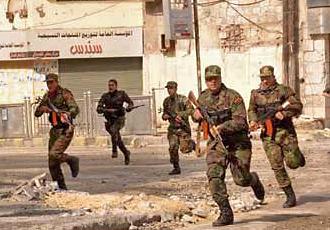 Why the left must support Syria's revolution


"Some on the U.S. and international left cling to the idea that the regime presiding over this violence and repression is progressive--and that the uprising against it was engineered by Western governments.
Syrians have endured the bloodiest chapter of the Arab Revolutions that swept through the region, starting in 2011. After months of mostly peaceful protests, Syria's revolutionaries--responding to the dictatorship's violent crackdown--had to develop a popular armed resistance to defend themselves and defeat the forces of the regime.
In the litany of sins that the Syrian people have supposedly committed in their two-year-old uprising, for supporters of the regime in left groups, top on the list is aid coming from the U.S. and other Western governments to some organizations among the rebels.
One question that comes to my mind is whether these apologists have similar criticisms about the much more substantial military aid the regime gets from Russia and Iran. But even more to the point is the issue of what these regime supporters were saying before the uprising against Assad shifted toward armed struggle.
Where were they when, for months, Syrians gathered peacefully in the hundreds of thousands in cities around the country, only to be shot dead by Assad's forces? Did they speak up when opponents of the regime, young and old, men and women, were tortured in Assad's dungeons? Are they calling for freedom of all political prisoners and the brave young citizen reporters who are risking their lives to document the government's repression?

Or are they using any and all reports of the U.S. government's involvement in Syria as a cover for a shameful subservience to dictatorship?"
Posted by Dick Gregory at 14:42 No comments: spill over from Golan into Israel

There goes the idea that the Syrian revolution is an Israeli plot. Must be the Illuminati and the lizards.
Posted by Dick Gregory at 20:25 No comments: 'Russia and China are Assad's strongest international backers and have used their veto power at the U.N. Security Council to prevent the international community from imposing international sanctions against Syria.But Seifan, the Syrian economist, said it's unlikely international companies, even Russian and Chinese ones, will want to commit huge investments to any exploration now "because they don't know what the fate of the regime will be after few months." '
Posted by Dick Gregory at 00:33 No comments: