Interview with the Mother of Khaled al Issa

'I am Ghalia Rahal, the mother of the martyr, Khaled al-Issa. Khaled was among the first revolutionaries to take part in the peaceful demonstrations in Kafr Nabel from the very beginning in Syria. Until the very last, he never deviated from the revolution because he believed strongly in its ideals and in his country. He defended the people who were being killed by the Syrian regime and Russian aerial bombardments and the injustice and oppression of the regime in Syria.

Khaled believed deeply in Syrians’ aspirations and he would tell me: “My Mother, from the very first day that I began taking part in the protests, I considered myself as ready to die for the revolution. I’m going to work for the people – because I’m sure that after all the sacrifices we have made, there will be results. And even if we cannot see the results ourselves, the children who follow us will be able to see the results one day. ”

Khaled used to go to Aleppo a lot to document the crimes going on there. The last time I talked with him he told me there were so many people in Aleppo who were being targeted and bombed and yet there were not many journalists in Aleppo. That’s why he wanted to go there – to document the crimes that were actually taking place. By taking photos with his camera, he could photograph cases of massive violations of human rights taking place in Aleppo. The last thing he told me was thousands of journalists and photographers were needed to cover the crimes that were occurring in Aleppo.

He used to tell me: My Mother, you should continue working with women so that they can learn resistance during the war and prepare the following generations with an education, where criminality, murders and destruction no longer exist and so that peace reigns.  He used to say: My Mother, if I am there or not, you must continue your work and I will continue mine too. That is why I will continue my work. Khaled’s spirit is with me constantly and I will continue even if there is no physical presence, because his spirit will always be with me. Firstly, as a Syrian citizen and secondly, as the mother of the martyr Khaled al-Issa and as one of those who participated in the Syrian revolution from its earliest days, and with the help of God, we will continue until our very last breath.

Even if we have lost those who are dearest to us, we will be stronger and will continue for our children. We will carry on for the following generations; for freedom and dignity and even though, as I told you, the price is dear. Yet despite this price we will carry on. We say no to tyrants, no to the unfaithful, no to destruction, no to assassinations. We live for peace alone. Our sacrifices will be for peace and nothing else.'
Posted by Dick Gregory at 14:00 No comments:

'Nasser lifts another cigarette to his mouth with a scarred left hand, chain smoking and watching action films on a grainy TV at his friend's flat in a Beirut suburb. Since deserting President Bashar al-Assad's army he mostly avoids venturing outdoors.

He limits his movements to a few hundred yards from this temporary accommodation, fearing arrest for squatting in Lebanon illegally. Nasser used an alias for fear of identification by Lebanese or Syrian authorities.

Many young Syrian men are deserting like Nasser or dodging the draft altogether to avoid the experiences that have left conscripts physically and mentally scarred and with an uncertain future. The prospect of being forced to fight in a civil war is a major factor driving them in large numbers to seek refuge in neighboring countries or Europe.

After his injuries and nearly three years of service, Nasser deserted and hid at home in Damascus for one year. He turned himself in when Assad announced an amnesty for deserters, but said he was immediately sent for 15 days of interrogation.

Instead of returning to his unit, Nasser fled to Lebanon, crossing illegally for fear of being turned back, and has moved from one location to another for months, struggling to find work and failing to obtain refugee status.

"I'm young but tired of life. Every time I see a military vehicle I'm scared, it's constant stress."

"There are guys who haven't seen their families for years while they've been in the army. Sometimes the families don't know if they're still alive," said Jawad, whose brother fled to Germany to avoid enlistment. "I don't want to kill anyone. It's an injustice that someone who doesn't want to fight is forced to," Jawad added. He wants to see his family in coastal Latakia, but will not return while the war rages for fear of being drafted.

Kheder Khaddour of the Carnegie Middle East Center said the number serving in the army is likely to have shrunk considerably through defections, deaths, desertion and draft-dodging. "If it was 300,000 in the army, now it's less than half and probably less than that, that seems like a large number," Khaddour said.'

Posted by Dick Gregory at 12:54 No comments:

'Late Saturday night, Hezbollah and regime soldiers surrounding the village of Hurayra, near the Qalamoun mountains, picked up microphones and projected a warning to the 4,000 people inside: They had 24 hours to evacuate. By the next day, half of the 800 families in the mountain village had left.

The village, 32 kilometers west of Damascus and administratively part of Zabadani, is included in the Madaya, Zabadani, al-Fuaa, Kefraya agreement between the regime and rebel forces. When the 24-hour deadline expired, the forces that surrounded the village “began shelling and spraying the village with machine gun fire,” said an activist who fled Hurayra and is now in an undisclosed location in the suburbs of Damascus.

Q: Did the regime or Hezbollah forces issue any evacuation orders?

Yes, both forces used amplifiers to order Hureirah’s population to leave their homes. They gave the residents 24 hours on Saturday night.

Q: Who stayed behind?
No military age men remain in the village, are wanted for avoiding mandatory service. All who remain are women, children and the elderly.
The families who have stayed in the village do so because they are scared of passing through the military checkpoints. Many of these are either family members of draft dodgers or opposition fighters.'
Posted by Dick Gregory at 11:48 No comments: 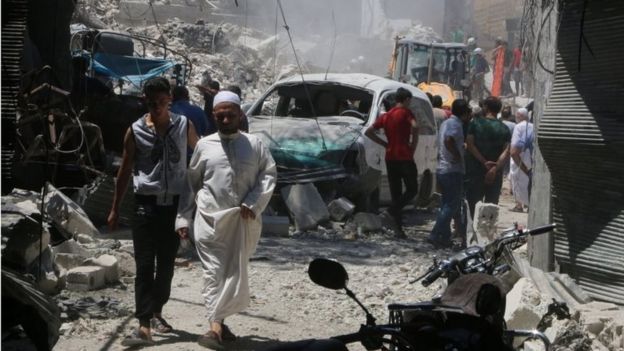 'Aleppo is no stranger to sieges - there have been at least eight recorded across its turbulent history. But this one promises to last longer than all the others put together.

Many of the 300,000-plus unfortunates trapped inside face the prospect of slowly starving as extortionately-priced food, medicine and fuel supplies are systematically blocked.
Some will die before then from the Syrian and Russian government barrel-bombing. Latterly supplemented by incendiary cluster munitions burning to 2,500C, the bombers are steadily eradicating schools, hospitals and markets from above with impunity.

Last week, a report by the Organisation for the Prohibition of Chemical Weapons (OPCW) accusing the Syrian government of failing to declare its stocks of sarin and other illegal warfare agents for the Russian-brokered 2013 chemical weapons deal, raised barely a murmur in the Western media.
Syria's moderate opposition groups have suffered years of broken promises of support from the international community. Myriad proclamations of "Assad must go" were followed by handwringing from the sidelines. But even the rebels were not prepared for the latest twist that took place in Moscow a few days ago; when John Kerry agreed with Sergei Lavrov to coordinate US-Russian military strikes on the so-called Islamic State (IS) and Syria's al-Qaeda-affiliate Jabhat al-Nusra. Nusra's aim has always been to set up Islamic emirates inside Syria, an ideology at odds with Syria's Free Syrian Army (FSA)-linked moderate opposition, yet the two have often found themselves allies of convenience in the fight against President Assad. The dynamics of the battlefield are such that, were Nusra to withdraw their military support or be targeted, the FSA rebels would be left even more vulnerable to attack.
North of Aleppo they are already battling on three fronts - against IS, the Kurds and the Syrian government. In Aleppo itself there is no IS presence and very little Nusra either - yet civilians on the ground do not trust the bombs will stop simply because of the new US-Russian deal.

The international community is forgetting that all these destabilising factors - the surge of refugees, the exporting of IS terrorism and Jabhat al-Nusra extremism - have been incubating undisturbed inside Syria for the last five years.
Millions of Syrian civilians have fled and many more will inevitably follow.'
Posted by Dick Gregory at 07:48 No comments: 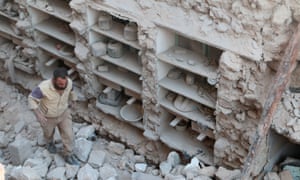 ' “I’m sitting here in a ruined house in eastern Aleppo,” said Abu Sobhi Jumail, a Syrian opposition fighter who has fought across northern Syria for the past five years. “I have the Russians in the skies, the Syrian air force too, when its planes can fly. I have Isis to my east, Hezbollah to my north and al-Qaida [Jabhat al-Nusra] in between. They abandon us, and tell us to rely on God, and then condemn us when we are forced to seek help [from al-Nusra]. Without them we would all have been killed a year ago. That is not politics. That is life and death.”

“We are doomed in Aleppo,” said Suleiman Aboud, who fled with his family from the rebel east of the city in February. “The next phase of this will be revenge. No one has paid a price for all these abuses. That is what hugging Assad does. This revolution was noble. It may not have been fully democratic, but people are allowed to fight oppression. We have the same rights to safety and freedom as you.”

Acknowledging the immense suffering across rebel-held parts of the country, Gareth Bayley, the UK’s special envoy for Syria, said: “The situation on the ground in Syria is dire. The UK is deeply concerned by the regime and its allies taking ground and harming civilians in Aleppo and rural Damascus. This is in direct violation of the cessation of hostilities and there is appalling suffering amongst the population.”
There is no way out of eastern Aleppo and north to the Turkish border, with the last remaining supply line severed. A blockade that has all but taken hold over the past year is now likely to be enforced, say the few remaining residents of the eastern half of the city.
“For a long time people have been out of ideas,” said Abu Subhi. “There is no enthusiasm to assist us. They want it all to go away. But you will all be judged for what has happened in Syria. I won’t be alive to witness it, though.” '
Posted by Dick Gregory at 12:49 No comments: